A trial of independence leaders treats their 2017 protests like a coup. That’s not what happened. 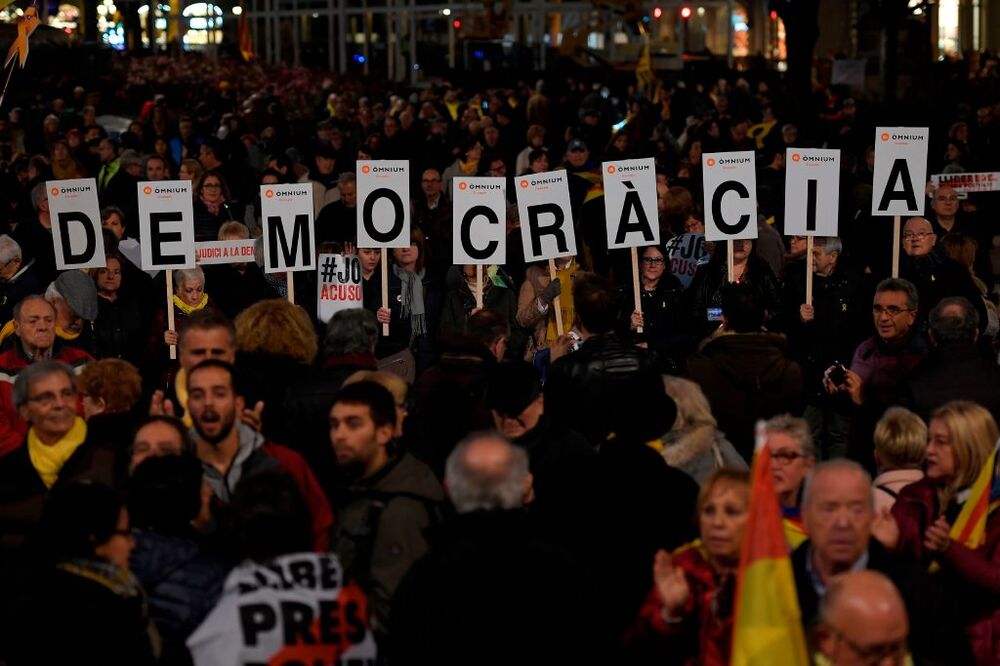 Spain’s democracy can take the protests.

Photographer: Lluis Gene/AFP/Getty Images
Noah Feldman is a Bloomberg Opinion columnist. He is a professor of law at Harvard University and was a clerk to U.S. Supreme Court Justice David Souter. His books include “The Three Lives of James Madison: Genius, Partisan, President.”

The trial of a dozen leading Catalan politicians in Madrid on charges of rebellion isn’t something you expect to see in a functioning European democracy. The events of fall 2017 weren’t a rebellion in the ordinary sense of the word. It was nonviolent political grandstanding that the Spanish state easily shut down. The effort shouldn’t have succeeded, but it also shouldn’t be harshly criminalized.

Yet Spanish prosecutors are seeking prison sentences of up to 25 years for the Catalan independence leaders, who were acting on behalf of a large number of supporters. By seeking to imprison the movement leaders for a generation, the Spanish government isn’t projecting strength. It’s projecting weakness.

In the 17th, 18th, 19th and 20th centuries, Catalans violently rebelled against Spanish rule. The constitutional crisis in the fall of 2017 didn’t resemble those earlier efforts in any way. To summarize and oversimplify, the key trigger of the crisis was the decision by the democratically elected Catalan parliament in September to stage an Oct. 1 referendum on independence.

In an act of outright defiance, the Catalan parliament and its leader, Carles Puigdemont, announced they were planning to hold the referendum anyway and started asking local officials to open their polling stations.

Although some 12,000 national police deployed throughout Catalonia to block the referendum, the vote took place anyway. Police and protesters clashed, and civilians and police were injured.

Two days later, Catalan separatists staged a general strike and many thousands of pro-independence protesters took to the streets. The constitutional court suspended the Catalan parliament, a suspension the parliament refused to recognize.

In the days that followed, Puigdemont came close to declaring independence from Spain. The Spanish government invoked a constitutional provision allowing it to exercise direct rule over Catalonia. In response, the Catalan parliament issued a formal, if symbolic, declaration of independence.

The charges against Puigdemont and his top-level associates followed. Puigdemont fled the country. Most of the others stayed, and they are now on trial.

There is no doubt that the Catalan leaders flouted the commands of the Spanish state, including orders issued by the constitutional court. No rule-of-law state can allow democratically elected officials to ignore the commands of its legal authorities. So some steps against the referendum and subsequent declaration of independence were certainly justified.

Article 155 of the Spanish Constitution says:

If an Autonomous Community does not fulfill the obligations imposed upon it by the Constitution or other laws, or acts in a way seriously prejudicing the general interests of Spain, the Government … may … take measures necessary in order to compel the latter forcibly to meet said obligations, or in order to protect the above-mentioned general interests.

I explained the background to this rather extreme “federal execution” measure against Catalonia in a column at the time.

In retrospect, I think it’s still fair to say that the government was justified in invoking Article 155. Holding an independence referendum that the courts had suspended and subsequently declaring independence violated the law.

But charging and imprisoning political leaders is a very different thing. In essence, the Spanish government is acting as though the Catalan leaders staged a coup. When that happens, trials and harsh sentences typically follow.

Look at Turkey, where the government is holding mass trials and convicting hundreds of defendants at a time in response to the 2016 coup attempt against Recep Tayyip Erdogan.

Although the Catalan leaders defied the Spanish Constitution, they didn’t take violent steps to replace the government. The public protests don’t bear any resemblance to a coup. The Catalan leaders didn’t try to gather military forces of their own.

That’s why it’s such a mistake for the Spanish government to charge the leaders with rebellion and sedition and to seek long prison sentences against them.

A strong democracy can tolerate peaceful demonstrations, including declarations of independence that have no chance of being backed up by force. To a strong democracy, these challenges are properly understood as symbolic.

When a democracy treats nonviolent symbolic demonstrations as though they were an attempted coup, it signals that its authorities aren’t very confident in their real-world power. Spanish authorities may think they are sending a message to Catalans, and they are: It’s a message of insecurity.

Spain isn’t Turkey, and it shouldn’t behave as though it were. The Catalan leaders challenged the Spanish constitution and lost. But they did it peacefully, in the name of self-determination and democracy. That shouldn’t be treated as a crime — not by a democracy confident in the strength and power of the rule of law.

This column does not necessarily reflect the opinion of the editorial board or Bloomberg LP and its owners.

To contact the author of this story:
Noah Feldman at nfeldman7@bloomberg.net

To contact the editor responsible for this story:
Stacey Shick at sshick@bloomberg.net