Woman Dies After Eating at Michelin-Starred Restaurant in Spain 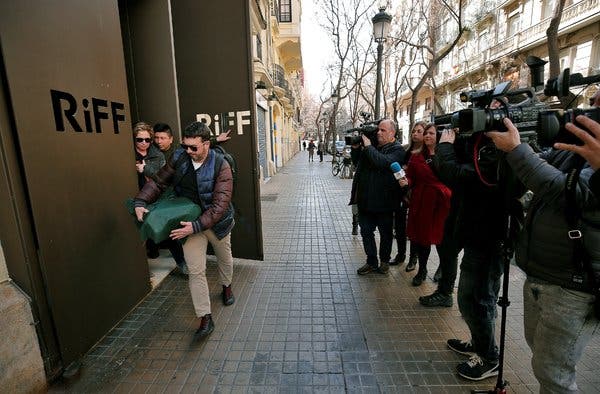 RiFF, the restaurant in Valencia, Spain, has closed indefinitely as regional health officials investigate the death of a woman who fell ill after eating there.CreditCreditManuel Bruque/EFE

The authorities in Valencia are investigating the death of a woman who had eaten at a Michelin-starred restaurant, its owner said this week, as Spanish news outlets reported that the establishment had been tied to as many as 28 other cases of food poisoning.

Bernd H. Knöller, the owner and head chef of RiFF, said in a statement that the restaurant would be closed until “the causes of what happened are established and we can resume work with full guarantees for both the staff and customers.”

He said the decision was based on what he had learned from Valencian health authorities about “different gastric illnesses in several customers of the restaurant, including the death of one.”

Mr. Knöller said that he had offered his “full collaboration” with the investigation by the regional Ministry of Health to determine what caused the death. The woman, who has not been publicly identified by the authorities, died at her home on Sunday morning, the restaurant said in an emailed statement.

“We are awaiting the results of the official investigation, which will determine whether the cause of death has any connection with the food served at the restaurant,” it said. “All other guests have recovered from the symptoms.”

Valencia’s Ministry of Health did not respond to requests for comment. The head of the ministry, Ana Barceló, told reporters on Thursday that investigators had interviewed 75 people who had eaten at the restaurant from Feb. 13 to Feb. 16, according to the Spanish news outlet Europa Press.

Of those 75, investigators found 29 with symptoms of food poisoning, including the woman who died, the Spanish newspaper El País reported. The other 28 people were said to have suffered mild symptoms, including vomiting and diarrhea, it said.

Ms. Barceló declined to comment on speculation in the local media that a mushroom might have caused the outbreak, saying it was “irresponsible to establish the origin” before an autopsy and other tests were completed.

She also said that an initial inspection of the restaurant found that “everything appears normal,” according to El País.

Citing anonymous sources within the ministry, the newspaper said that the authorities first learned of food poisoning symptoms on Feb. 17, the day after the woman who died had fallen ill, as had her husband and their son.

Ms. Barceló said that the authorities had collected samples from the restaurant’s tasting menu for tests by the National Institute of Toxicology and Forensic Science.

RiFF was awarded a star by the prestigious Michelin Guide in 2009, according to the restaurant’s website. The guide said the chef, Mr. Knöller, created “innovative cuisine” and “interesting set menus” based on “the highest quality, seasonal, local products.”

In his statement, Mr. Knöller said that initial inspections of the restaurant had found it complied with sanitary regulations. “Regardless of what reason may have caused this situation,” he added, “I want to convey my profound regret for what happened.”

A version of this article appears in print on Feb. 22, 2019, on Page A4 of the New York edition with the headline: Top Spanish Restaurant Closed After Diner Dies