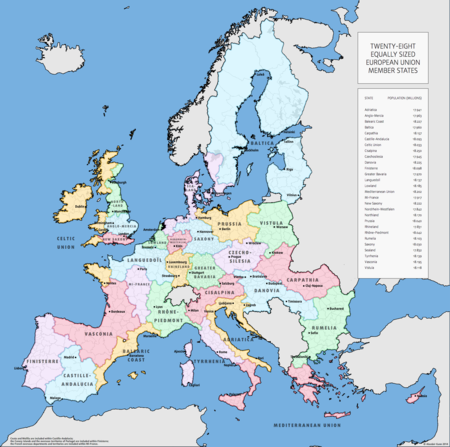 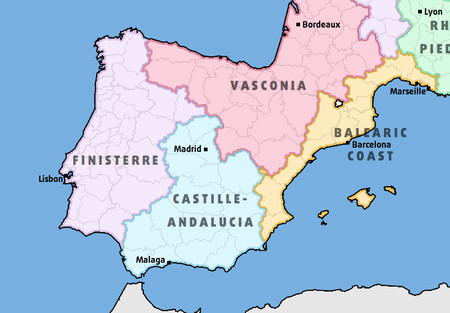 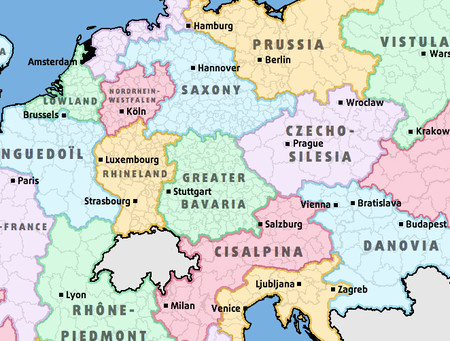 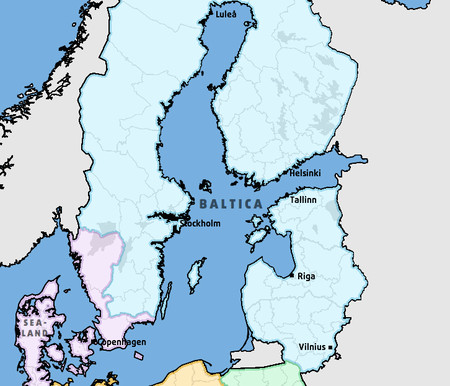 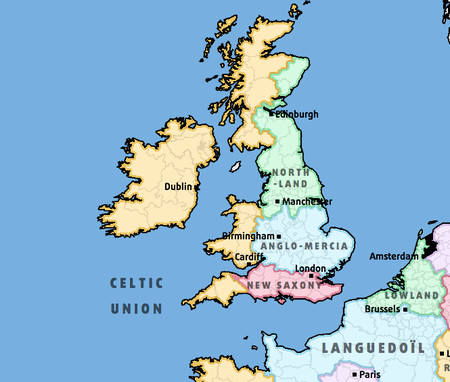 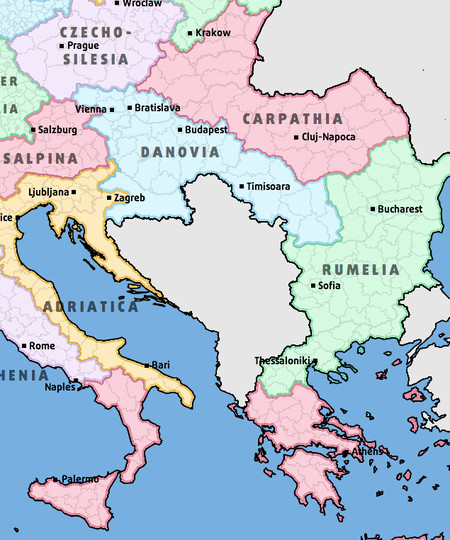 How to Save the EU: This Map of "Equipopulated" European Countries

New word of the day: equipopulous. Country A is equipopulous to country B if it has the same number of inhabitants. This map shows what a European Union with 28 equipopulous member states could look like. But why?

The European Union, like any other federation of states, performs a tricky balancing act between the interests of its member states and the democratic rights of its citizens. Full membership implies an equal say in the affairs of the federation, no matter how big or small the state. But in a democracy, all citizens may expect their voice to carry the same weight, irrespective of their country's size.

The U.S. resolves the same problem by differentiating between the two chambers of its parliament. The Senate is composed of two senators for each state, while the House of Representatives is elected on a proportional basis (e.g. 36 members for Texas, but only 2 for Maine).

The European Parliament only has one chamber, which is elected proportionately. The member states get their due by providing 1 member each to the European Commission, which acts as the E.U.'s executive body. The 28 commissioners propose legislation, implement decisions and swear an oath to uphold the E.U.'s treaties. They are bound to promote the interests of the Union in its entirety, not just of their member state.

But not only is a cabinet of 28 members (and more, if the E.U. continues to enlarge) rather unwieldy, the disproportion between the commissioner representing the largest state (Germany, 81 million) and the smallest one (Malta, 420,000) is an indication of the tensions built into the system.

One solution: keep the system, change the member states! A proposal to divide California into 6 separate states (discussed in #646) recently gained enough signatures to appear on the 2016 ballot. It would, among other projected benefits, increase the number of senators representing the same population from 2 to 12. Maps of the entire U.S. redrawn as 50 states with equal population also crop up with some regularity.

Similar thought (and map) experiments are rare to nonexistent for the European Union. Could it be that the democratic disconnect between the institution and its people is so great that remediation seems a less likely solution than disintegration?

Perhaps. But here anyway is a brave attempt to right the wrong that is the disproportionalism of the European Commission. This map was produced by Alasdair Gunn, who stresses that “[it] is NOT intended in any way to represent meaningful units of government, at any point in time. This map was made (1) for fun and (2) to draw attention to the massive imbalance between member states at the Commission level”.

The 28 member states of the E.U. together add up to a population of 506 million. The ideal average would therefore be a member state with just over 18 million inhabitants. Basing himself on existing administrative borders, Mr. Gunn came up with this map which, if nothing else, provides a good view of the more and less densely populated areas of the E.U.

But the joyous, or infuriating (if you're the Daily Mail) central attraction of this map is its eradication of national borders, replacing the tired old sameness of existing states with a fresh new batch, without the ballast of presumed prejudice and historical injustice. Not that all states are entirely new: a few have names and locations that have a familiar ring to them. 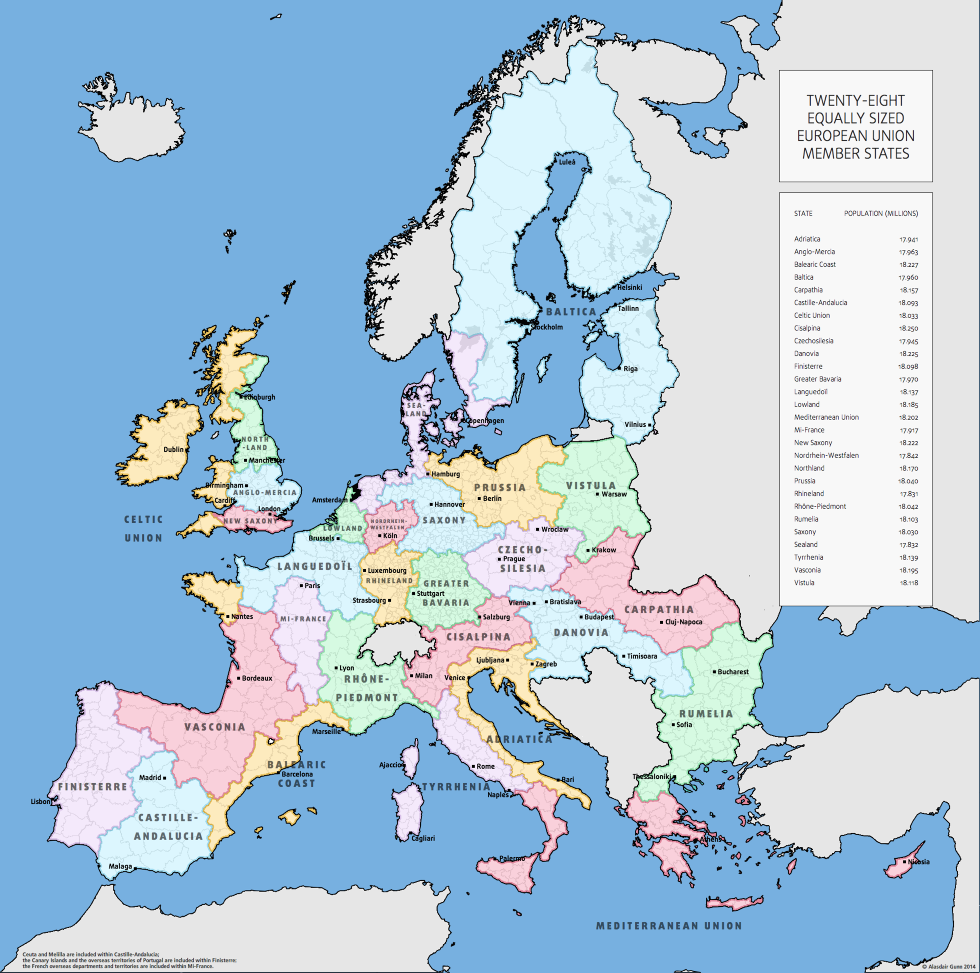 Like the Celtic Union: a gathering of Ireland, Scotland, Brittany, Wales and Cornwall. Except that for reasons of equipopulousness (or should that be: equipopularity?), part of Scotland is attached to Northland, running all the way down the north of England to Manchester. The English south coast and London are New Saxony, and the region in between, from the Midlands to East Anglia, is Anglo-Mercia.

Britain is dead and buried, but then so is France: Mi-France comprises Paris and a thin territorial island covering the French interior. Langedoïl covers the north (and includes the French-speaking south of Belgium, as well as Brussels). Alsace-Lorraine – and Luxembourg – are part of a post-German Rhineland, while Rhône-Piedmont stretches from Burgundy to the Côte d'Azur, but also extends into the Italy's northwest, eating up a good chunk of its riviera. The Balearic Coast centres on Catalonia, but runs from Marseille to Cartagena. The Basque Country is the focal point of Vasconia, a gigantic region on either side of the Pyrennees. Only two other states fill out the Iberian peninsula: Finisterre, uniting Portugal with Galicia (in the north) and other western parts of Spain. The remainder, from Madrid to Malaga, is called Castille-Andalucia.

Italy's shinbone, Corsica and Sardinia find each other in Tyrrhenia, a state named after the sea they all border. On the other side of the boot, Adriatica runs from Bari to Dubrovnik, absorbing all of Slovenia and the coastal half of Croatia. The E.U.'s southeastern flank is dominated by the Mediterranean Union, consisting of Sicily, the tip of the boot, most of Greece, running all the way to Cyprus.

Milan reorients itself towards Austria, united in Cisalpina – but Vienna looks east, as part of Danovia, which is an Austro-Slovako-Hungaro-Croato-Romanian assemblage. It borders Rumelia: Bulgaria, sandwiched between Romania's southeastern half and Greece's northern third. Carpathia is a semicircular state stitched together from bits of Poland, Slovakia, Hungary and Romania.

Czecho-Silesia is the Czech Republic with some Poland sprinkled on top, Vistula is what remains of Poland with Prussia spread-eagled on the Oder-Neisse border with Germany. Greater Bavaria, Saxony and Nordrhein-Westfalen fill out most of the rest of Germany, except for a coast strip called Sealand,which unites Denmark with southern Sweden, northern Germany and northeastern Netherlands. The rest of the Netherlands and Belgium is thrown together as Lowland.

Many thanks to Mr. Gunn for sending in this map.