No joke: A comedian leads polls in Ukraine's presidential race 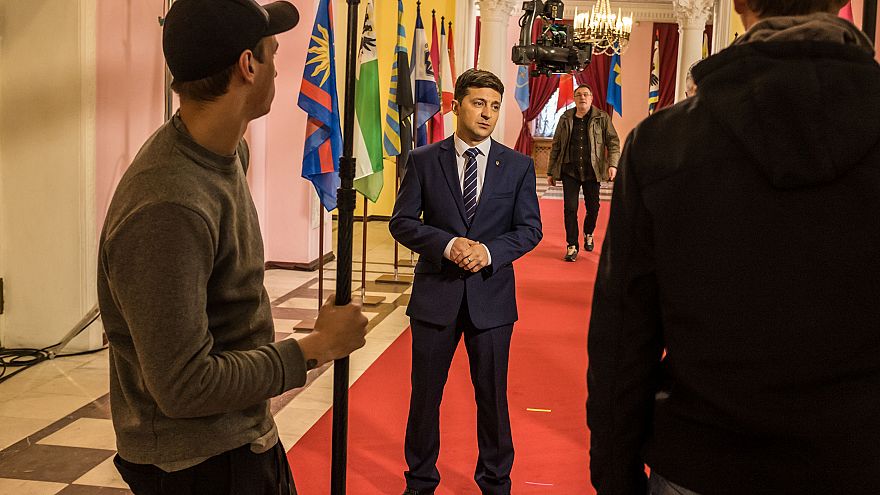 Volodymyr Zelenskyi on the set of Ukraine's "Servant of the People" TV show earlier this week. -
@ Copyright :
Oksana Parafeniuk

KIEV, Ukraine — Pacing back and forth, Volodymyr Zelensky rehearses his lines as a director instructs him on how to smile and shake someone's hand.

Zelensky, 41, is running to become Ukraine's next president. But he is not shooting a campaign video.In what he hopes will be a case of art imitating life, Zelensky stars in a popular TV series, "Servant of the People," in which he plays a history teacher who is elected president after his rant about government corruption goes viral.

Zelensky has become one of the most recognized faces in Ukraine's entertainment industry in his more than two decades as a comedian, actor and producer. And while he plays a president on TV, he has no actual political experience. 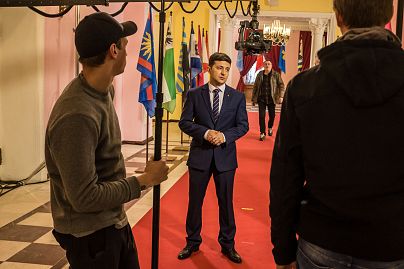 Volodymyr Zelenskyi on the set of Ukraine\'s "Servant of the People" TV show earlier this week.Oksana Parafeniuk

But with five weeks to go until voters head to the ballot box on March 31, a recent poll suggests Zelensky is the front-runner, with more support than the incumbent, Petro Poroshenko, or another candidate, former Prime Minister Yulia Tymoshenko.

Educated as a lawyer, Zelensky is also a savvy businessman who many Ukrainians see as a self-made man, one whose wealth is the result of hard work.

But the political novice's popularity with voters has left pundits scratching their heads.

"He is not some creation of political strategists. He is a real person, who has his own vision of how to really change this country for the better and make it about the people first and foremost."

He doesn't hold rallies, instead traveling around the country selling tickets to gigs at which he parodies many of the politicians he is running against. Zelensky also regularly communicates with supporters through behind-the-scenes campaign videos he posts on Facebook and YouTube — a fresh approach in Ukraine.

But some critics fear Zelensky might be biting off more than he can chew.Ukraine's next leader will have to deal with the increasingly belligerent actions of Russian President Vladimir Putin.If elected, Zelensky will inherit a country torn by the ongoing military conflict with Kremlin-backed separatists in the east, a crumbling economy, rampant corruption and tensions with neighboring Russia — which annexed Crimea in 2014.

Poroshenko declared martial law in parts of the country in November after Russia fired at, rammed and then captured three Ukrainian ships.

At the time, Poroshenko insisted his country was facing the "extremely serious" threat of a land invasion by Putin's troops.That clash in the Sea of Azov, which Ukraine described as an "act of aggression," is the latest example of Russia carrying out "creeping annexation" — where borders are subtly shifted to take territory, or in this case waters.

Zelensky, whose representatives said he was too busy on the campaign trail to be interviewed by NBC News, has previously stated that he wants to stop the war in Eastern Ukraine.

Asked whether he would talk directly with Putin to resolve the military standoff between the Ukrainian military and pro-Moscow separatists that has left 13,000 people dead since 2014, Zelensky said in an interview last year that he was ready "to negotiate with the devil himself as long as not a single life is lost."His willingness to engage with the Kremlin has alarmed some analysts and given his rivals a line of attack."

A Zelensky victory would be Putin's dream scenario," said Alexander Motyl, a political science professor at Rutgers University and contributor for Atlantic Council, an American think tank. "Putin is hoping for, and may be committed to doing everything possible to bring about, a Poroshenko defeat."

Dmitry Razumkov, who is an adviser to Zelensky, vehemently denied that the actor would yield to the Russian leader. "Zelensky is not ready to bargain with Ukrainian territory or Ukrainian lives," he said.

Some experts say Zelensky's showing in the polls illustrates how frustrated Ukrainians are with traditional candidates.

"There is a demand for new faces who are anti-elite," Olexiy Golobutskiy, a political strategist based in Kiev, said. "Just one-and-a-half months ago, nobody thought Zelensky would have any weight in this election."World news

Dmitry Razumkov, Zelensky's adviser, told NBC News that most Ukrainians see the role of a president as someone who has to protect their constitutional rights and lobby for their interests."You don't need any experience to do that," he said. "You just need to be a decent human being.

"Razumkov credits what he calls Zelensky's "sincere campaign" for his high ratings."No one tried to change Volodymyr's image — it's the same Zelensky that was here one year ago, a month ago or even a day ago," he added. "It will be the same Zelensky tomorrow. He is not some creation of political strategists. He is a real person, who has his own vision of how to really change this country for the better and make it about the people first and foremost."

Zelensky, who calls himself "very liberal," has pledged to tackle corruption, stop a brain drain out of the country and make Ukraine "prosperous" again. 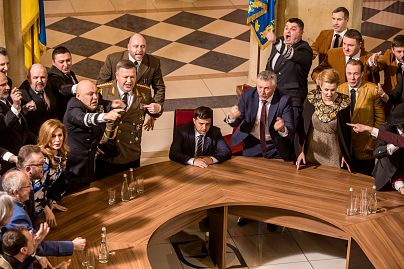 Volodymyr Zelenskyi appears in a scene in "Servant of the People."Oksana Parafeniuk

However, he has been accused of being the puppet of Ukrainian oligarch Ihor Kolomoyskyi.In December, Zelensky denied having any business ties to Russia — but last month he admitted to being paid royalties from his content produced before 2014 that still runs in the country.

Zelensky also hasn't been afraid of mocking Putin — his potential future adversary — in his comedy skits, wading into topics like the annexation of Crimea and even the Russian leader's alleged love affair with a former gymnast.Asked in December if he can imagine negotiating with President Donald Trump, Zelensky said he didn't see a problem."We are both from the same industry after all," he quipped.