Zhang Xiaoming, a top Chinese official overseeing Hong Kong affairs, in Beijing in March. On Wednesday, he spoke to members of Hong Kong’s establishment at a forum in Shenzhen, China.CreditCreditVisual China Group, via Getty Images

By Austin Ramzy and Tiffany May

HONG KONG — A top Chinese official overseeing Hong Kong affairs said on Wednesday that the city was experiencing its worst crisis since the former British colony returned to China in 1997, as weeks of near daily antigovernment protests continued with little sign of easing.

The “turmoil” in Hong Kong “has been going on for 60 days straight, getting bigger and bigger,” said the official, Zhang Xiaoming, the director of the Hong Kong and Macau Affairs Office. “The violence is getting more and more intense, impacting an increasingly wide part of the society. It can be said that Hong Kong is facing the most serious situation since its return.”

He said the demonstrations “have the clear characteristics of a color revolution,” a reference to uprisings in the former Soviet bloc that Chinese officials believe drew inspiration from the United States.

Mr. Zhang spoke at the opening of a forum in Shenzhen, a mainland city next to Hong Kong, to an audience of about 500 members of the Hong Kong establishment, including representatives to China’s congress and a national consultative body.

Weeks of demonstrations reached a high point with a general strike on Monday, when protesters blocked trains and roadways. Union officials estimate 350,000 people stayed home from work, including many aviation workers, leading to more than 200 canceled flights at the Hong Kong airport.

The day ended with mass protests across the city. The police fired 800 canisters of tear gas, approaching the total of 1,000 canisters fired over the previous eight weeks.

On Tuesday, a spokesman from Mr. Zhang’s office issued the central government’s sternest condemnation to date on Hong Kong, saying that the protesters “are extremely rampant and deranged,” and that a “blow from the sword of law is waiting for them in the future.”

Mr. Zhang struck a more measured tone in his comments on Wednesday, describing the meetings as an opportunity to hear from the people of the city so “the central government can make decisions that are closer to Hong Kong society.” After his introduction, reporters were asked to leave and the meetings continued behind closed doors.

The event was the first such joint meeting of the Hong Kong and Macau Affairs Office, a mainland agency, and the Chinese government’s representative office in Hong Kong since the 2014 Umbrella Movement, when pro-democracy protesters occupied parts of the city for nearly three months. 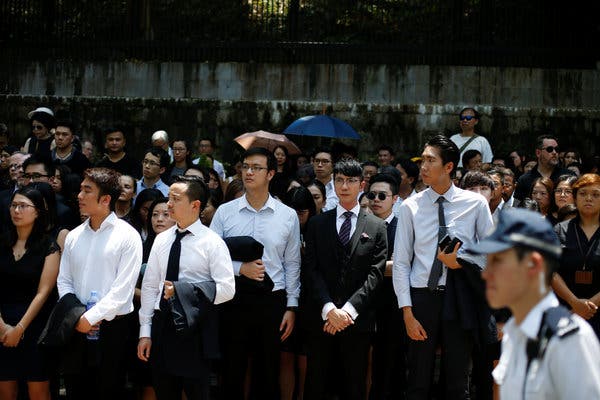 Thousands of lawyers marched to the offices of the Hong Kong Department of Justice on Wednesday to demand meetings with local officials.CreditThomas Peter/Reuters

Michael Tien, an establishment lawmaker, said he used the session to propose an independent investigation into the crisis and a full withdrawal of the extradition bill that set off the protests earlier this year, two key demands from protesters.

“We need to be concerned about the future generations if we do not handle this particular incident carefully,” he said. “By that I mean a high-level committee of inquiry to look at all the background of this, not just the police but also the protesters, the allegations about foreign government involvement and where the money comes from. There are many aspects to it.”

The legislation, which the government suspended in June, would allow the extradition of suspects to mainland China. Many people feared that it would expose Hong Kong residents to a judicial system controlled by the Communist Party, and that it was another step in the erosion of civil liberties in Hong Kong.

Mr. Tien was the first pro-Beijing politician to suggest a suspension of the bill.

Mr. Zhang told the forum Wednesday that a full withdrawal of the bill would imply that the stated intention of preventing Hong Kong from becoming a haven for fugitives was wrong. He added that an inquiry should wait until the unrest had eased.

This week Hong Kong officials have increased their public appearances after criticism that they had largely disappeared from view, leaving riot police officers on the streets as the most prominent representatives of the government.

When Carrie Lam, the Hong Kong chief executive, spoke to reporters on Monday, it was her first news conference in two weeks. She announced that the police would begin giving daily briefings. And Mrs. Lam made an unannounced appearance Wednesday at a public market.

The Civil Human Rights Front, the group that organized several protest marches, said the increasing volume of official statements was “fueling huge resentment by constantly condemning demonstrators rather than to help facilitate effective communication within the society.”

As pro-Beijing representatives met in Shenzhen on Wednesday, protests continued in Hong Kong. Thousands of lawyers marched to the offices of the Hong Kong Department of Justice to demand a meeting with the secretary of justice and the director of public prosecutions.

Dennis Kwok, a lawmaker who organized the march, said that the legal profession, which he represents in Hong Kong’s Legislative Council, was concerned that hundreds of protesters were arrested over political grounds.

“They are trying to arrest as many people as possible to scare them away from protests,” Mr. Kwok said, adding that the rioting charges protesters faced were “totally disproportionate” with the protests that took place. 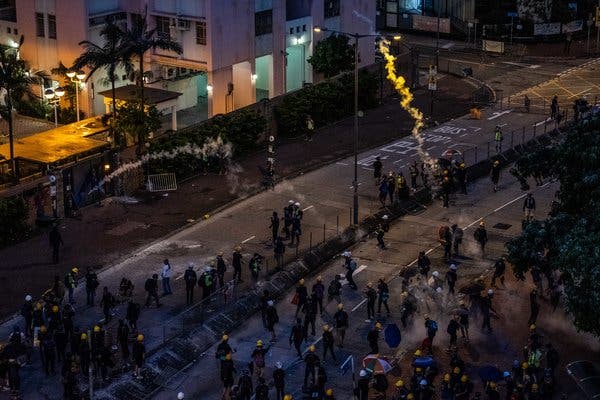 Police fired 800 canisters of tear gas on Monday, approaching the total of 1,000 canisters fired over the previous eight weeks.CreditLam Yik Fei for The New York Times

Lawyers at the rally said they were particularly concerned by mob beatings that took place in a train station last month. The government was criticized for its delayed response to the attacks, while it swiftly arrested protesters in another part of Hong Kong.

“All we want is justice. All we want is consistency,” said Kevin Yam, a lawyer. “We don’t want to watch a bunch of thugs get away with it while the best of our youths are prosecuted and their futures are being taken away.”

The event follows a silent march by lawyers in early June to call for the government to withdraw the extradition proposal.

On Tuesday, the police fired tear gas for the second consecutive night in the Sham Shui Po neighborhood. Protesters and residents complained that the tear gas was used with little advance warning as Claudia Mo, a pro-democracy lawmaker, spoke outside a police station.

Tse Chun-chung, a police spokesman, said people outside the Sham Shui Po police station hurled bricks and bottles and painted on the exterior walls. “Their acts put the officers and other citizens in danger,” he said.

Officers fired about 20 tear gas grenades and arrested nine people. Since the protests began, the police have arrested 589 people, ranging in age from 13 to 76.

“Since June, many protesters have used laser guns to target our officers,” said Mr. Tse. “The strength of these laser beams is stronger and stronger, and their colors are more and more diverse.”

The police also demonstrated a laser pointer during a news conference, directing it at a piece of paper from close distance until it began to smoke after a few seconds.

On Wednesday night protesters responded by gathering on the Tsim Sha Tsui waterfront, creating a light show of laser pointers against the backdrop of the Hong Kong Space Museum. They also attempted, unsuccessfully, to ignite a copy of a pro-Beijing newspaper with multiple laser pointers.

The mainland authorities have increasingly signaled their preparations to handle mass protests. A drill on Tuesday by 12,000 mainland police officers in Shenzhen included riot police confronting people in black clothing and yellow helmets — the unofficial uniform of protesters in Hong Kong. And last week the Hong Kong garrison of the Chinese military released a video of it training to handle mass unrest.