"Can an Outspoken Spaniard Give Europe One Voice in the World?", Steven Erlanger 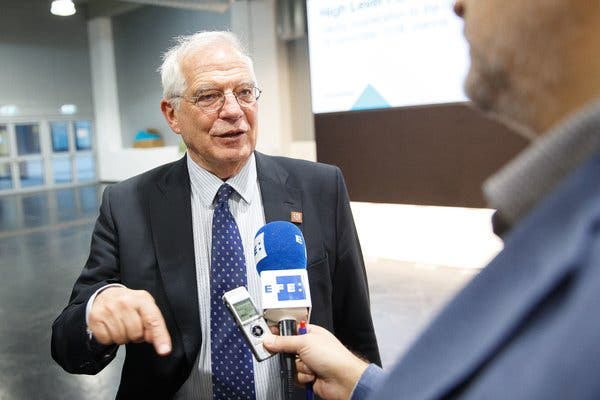 Josep Borrell Fontelles, a 72-year-old Spaniard with a taste for bluntness, is expected to be approved as the European Union’s new foreign policy chief.

BRUSSELS — In the recent horse-trading for the European Union’s top jobs, Josep Borrell Fontelles was among the more surprising of the choices, given his age and his tendency to say controversial things.

Mr. Borrell, a 72-year-old Spanish Socialist, suggested in a speech last year that all the United States had to do to achieve independence was to “kill four Indians.” He has spoken harshly of President Trump’s “hostility” toward Europe, “to describe us as foes.” When Mr. Trump suggested building a wall in the Sahara to keep out migrants, Mr. Borrell asked: “Does he know how big the Sahara is?”

Mr. Borrell, the Spanish foreign minister, is nonetheless likely to be approved in the coming weeks as the European Union’s next foreign policy chief, taking over from Federica Mogherini, the leader of the European External Action Service.

The switch, which requires the approval of the European Parliament, could not be happening at a more critical time. The foreign and security policy of the European Union is, generously put, a work in progress. As Ms. Mogherini prepares to leave her post, the challenges of a Trumpian America, a more aggressive Russia and a rising China have rendered Europe newly exposed.

In a comprehensive analysis of the European dilemma, the European Council on Foreign Relations said bluntly that “European countries are increasingly vulnerable to external pressure that prevents them from exercising their sovereignty.” The answer, it suggested, is that “the E.U. needs to learn to think like a geopolitical power.”

Mr. Borrell agrees. “The only way to survive in this world of giants is to unite to be strong together,” he said in July. 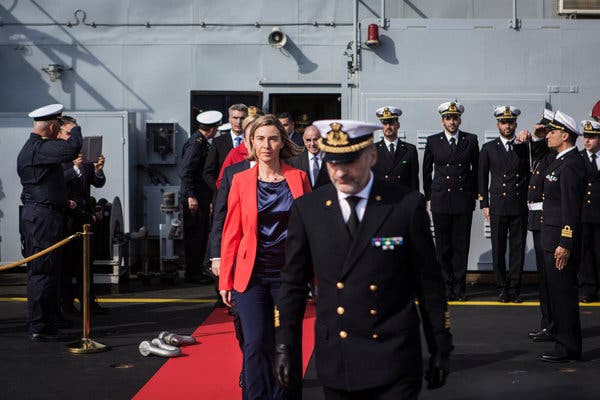 Federica Mogherini, whom Mr. Borrell will replace, has been energetic, jetting around the world and showing the European Union flag, but has few visible successes.

But given the essential weakness of the job he inherits — trying to find consensus among 28 nation states of different sizes and priorities, many unwilling to outsource their foreign policies — the question is whether he will have any larger impact.

Ms. Mogherini, an Italian Socialist, took the job in 2014 at the age of 41, after only eight months as Italian foreign minister, named after the usual European game of balancing parties, countries and genders for the top jobs.

She has been energetic, jetting around the world and showing the European Union flag. She has also worked to find and maintain consensus among the 28 member states on critical issues, including the 2015 Iran nuclear deal, a tougher tone toward China, increased defense cooperation and sanctions against Russia.

But she has had few other visible successes, having signally failed to bring Serbia and Kosovo closer to a settlement of their border dispute, and she is deeply unpopular with the Trump administration.

Mr. Borrell is a very different sort, a former aeronautical engineer with a doctorate in economics and long experience in Brussels, having been elected president of the European Parliament from 2004 to 2007 and remaining as a European legislator until 2009.

He has a reputation for candor and outspokenness, which may prove to be an asset or a liability, depending on the point of view.

Not long ago, he stormed out of a Deutsche Welle interview after questions about the treatment by Spain of separatists from Catalonia, where he was born and whose independence he sharply opposes. 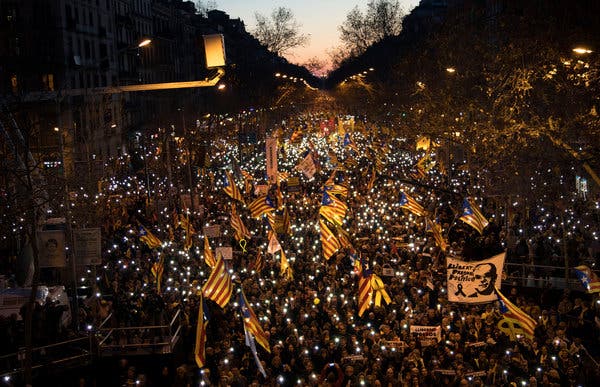 He has not shied from criticizing the Trump administration, saying America was acting “like a cowboy” in its efforts to overthrow Nicolás Maduro in Venezuela, judging Russian influence there exaggerated.

But he has also called Russia an “old enemy” that has “returned as a threat,” prompting Moscow to chastise Spain’s ambassador there. And he has said that while Brexit seemed at first like “an epidemic” for the European Union, it has ended up “a vaccine.”

More troubling for some is his record of criticizing Israel’s military responses in Gaza and his strong advocacy for Europe to recognize Palestine as a state. But he is also committed to a two-state solution and the “existence of Israel as a Jewish state and as a democracy.”

He has also shown strong sympathies toward the government of Iran. “Iran wants to wipe out Israel, there’s nothing new about that,” he said, and has praised Iran’s stabilizing “essential role” in Syria. He has defended the 2015 Iran nuclear deal that Mr. Trump has abandoned and has vowed to try to save it.

Before he is confirmed, he is also likely to face questions about corruption allegations, including a fine of 30,000 euros imposed last autumn for insider trading in 2015 involving the Spanish company Abengoa, on whose board he served. Mr. Borrell denied the charges, but chose not to appeal the fine.

Mr. Borrell has said little since his nomination, and a request through his ministry for an interview has not been answered.

Despite his taste for bluntness, in most of his attitudes, Mr. Borrell comes across as a relatively jolly figure with views typical of the European center-left. 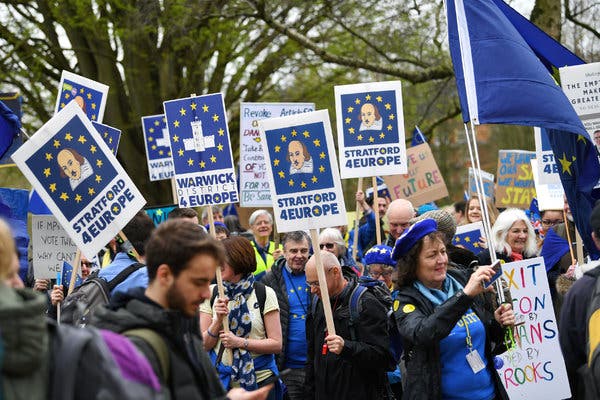 An anti-Brexit demonstration in London. Mr. Borrell has said that while Brexit seemed at first like “an epidemic” for the European Union, it has ended up “a vaccine.”CreditDylan Martinez/Reuters

That was especially evident in a long session in which he spoke at the Center for Strategic and International Studies in Washington in April, before the European parliamentary elections.

He strongly supported the trans-Atlantic alliance and NATO and said that shared values would outlast the presidency of Mr. Trump, whom he criticizes as damaging the institutions of multilateralism designed by the United States after World War II.

“It’s the most important relationship we have,” Mr. Borrell said, adding “our citizens on both sides of the Atlantic depend” on its “good health.” Still, he said, citing disputes over trade, Iran and Brexit, “everyone is aware that with the Trump administration this relationship has been put into question.”

Washington’s unilateralism is damaging, he said, citing sudden decisions on Iran, Syria and the treaty on land-based intermediate-range nuclear missiles. It is not very pleasant for Europeans to wake up in the morning, he said, and “find that the United States has taken a decision that affects us.”

The alliance transcends temporary leaders, he said, but importantly for Europe the world has changed, with new, asymmetrical threats coming less from Moscow than from chaos in “the south and east,” from the Middle East and Africa.

Like Ursula von der Leyen, who has been approved as the new president of the European Commission, Mr. Borrell believes that in the complicated post-Cold War world “Europeans have to build our own strategic capacities,” but in partnership with NATO, not in competition or opposition to it.

[Read more about Ms. von der Leyen, who could be the first woman to hold the top European Union job.] 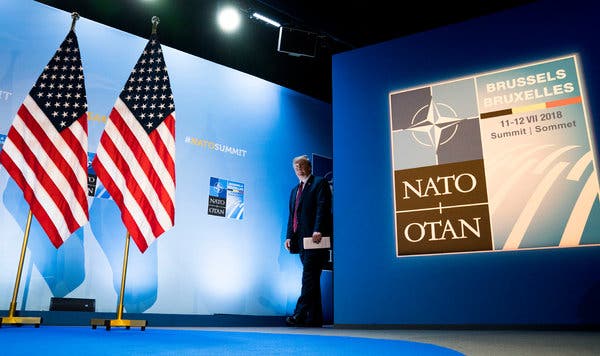 Secretary of State Mike Pompeo met with Mr. Borrell in Brussels on Tuesday, and had a warm meeting, according to the American ambassador to the bloc, Gordon Sondland. He said that Mr. Pompeo wanted to “reset” often difficult relations with the European Commission.

Unlike some of the comments Mr. Borrell has made in the past about the United States, Mr. Sondland said, “his views were surprisingly very complementary to ours, so notwithstanding what I’ve read in his past statements, he was surprisingly talking like a close friend and ally of the United States.”

Nathalie Tocci, a senior adviser to Ms. Mogherini, believes that Ms. von der Leyen and Mr. Borrell are good choices. She said that she thought that, given his age, he would be less inclined than Ms. Mogherini to ceaseless travel and might be more effective, given the institutional requirements of the job.

“After five years of a representative who placed the highest emphasis on the E.U.’s visibility in the world, a successor who hones in on the institutional dimension of European foreign policy and selects only a few dossiers on which to focus may be what is needed,” she wrote.

Having watched the bloc’s foreign policy from Parliament and from the Foreign Ministry of a major member state, Mr. Borrell has made clear his own frustrations, he told the European Council on Foreign Relations in May.

“We are steadily losing influence as Europeans, and when we have intervened, we have done so as states,’’ he said. ‘‘There are few policy actions conceived from the European Union as a European action.”

The European Union’s Foreign Affairs Council, he said, “is more a valley of tears than a center of decision-making because it’s where all the open sores of humanity come.”

‘‘They tell us their sufferings, we express our condolence and concern,’’ he added. ‘‘But no capacity for action comes out of it, and we just move on to the next one.”

An earlier version of this article cited an inaccurate quotation from Josep Borrell Fontelles. While Mr. Borrell has said that Mr. Trump is “the first American president to voice hostility towards the European project, to describe us as foes,” he has not called Mr. Trump Europe’s “newest enemy.”