This week’s Democracy Digest comes from Budapest, where the ruling Fidesz party has rediscovered billionaire philanthropist George Soros as public enemy number one.

The 89-year-old Hungarian-born US financier had disappeared from the headlines for a while — possibly thanks to Fidesz efforts to polish its image and save the party from expulsion from the European People’s Party political bloc in the European Parliament.

Fidesz may also have been wary of provoking ill will in the European Parliament lest it jeopardise approval of Hungary’s second commissioner candidate, Oliver Varhelyi, after its first choice, Laszlo Trocsanyi, was nixed in September.

As soon as Varhelyi — the last member to be appointed to the European Commission of Ursula Von der Leyen — secured the neighbourhood and enlargement portfolio, the government-loyal Magyar Nemzet local newspaper dug up the hatchet.

The paper trumpeted on its front page that George Soros had tried to prevent the approval of Varhelyi as commissioner “because it would be a lethal danger to European integration if this position were given to a representative of the Hungarian government”.

Citing unnamed national security sources, the paper said Soros called the director of the German Council on Foreign Relations (DGAB) think tank in Berlin and asked her to try to convince German Chancellor Angela Merkel to prevent Budapest from getting the enlargement portfolio. 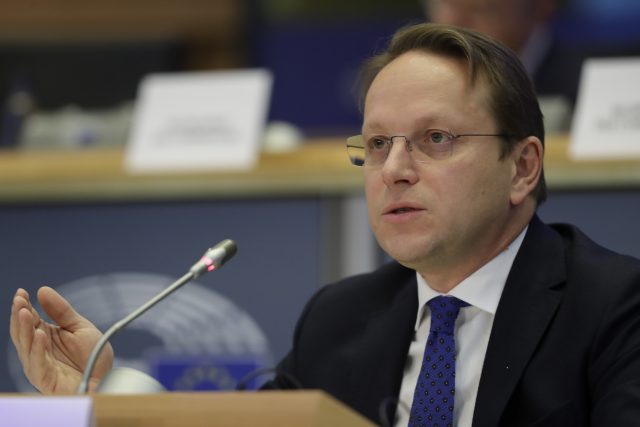 Oliver Varhelyi, European Commissioner-designate in charge of neighborhood and enlargement policy, answers questions during his hearing before the European Parliament in Brussels on November 14, 2019. Photo: EPA-EFE/OLIVIER HOSLET

According to Magyar Nemzet, “the phone call came as no surprise to [DGAB Director] Daniela Schwarzer, because they talk regularly with Soros, who is one of the financiers of the institute, but she tried to explain to Soros that things don’t work this way”.

The newspaper gloated that in the end, even Soros could not keep Hungary from getting the enlargement portfolio — what Prime Minister Viktor Orban called “the most important diplomatic victory of the last 10 years”.

But the paper told its readers that Soros and his network remained active and influential in Brussels and in the European Parliament, and that all criticism directed against the government ultimately stemmed from this network.

The “news” made huge waves in the Hungarian media, with Fidesz-loyal websites proclaiming that the old war between Soros and the patriotic Hungarian government had resumed.

But it soon turned out that the news was unfounded. Index, a site that is critical of the government, quoted Schwarzer as saying that “Soros did not ask her to talk to Angela Merkel about Varhelyi” and called the whole story false.

No government-loyal media published Schwarzer’s words or the denial, instead carrying on with fabrications about how Soros continues to fight Fidesz.

Analysts say the relaunch of the familiar anti-Soros campaign shows that the governing party’s spin doctors are still floundering after Fidesz suffered surprise losses in municipal elections in October. It seems they have few new ideas to keep up the combative spirits of their supporters. Young environmentalists stage a protest in front of the Parliament building in Budapest in 27 September 2019. Photo: EPA-EFE/Zoltan Balogh

A recent study revealed that the national-conservative Fidesz party is losing the youth vote. It is surely a paradox that a party founded as the Alliance of Young Democrats has its lowest support among people aged 19-29 (35 per cent), according to a recent poll by Median.

True, Fidesz polls better in this age group than the centrist Momentum Movement party (16 per cent), but the trend is likely to worry party strategists.

Meanwhile, Fidesz has narrowly lost its first place support ranking among university students to Momentum, according to a recent study by a research group of the Hungarian Academy of Sciences.

If the governing party is making long-term plans (as it generally does), losing touch with young people could prove to be a costly error — something the party leadership is keenly aware of.

But instead of reaching out to young people, analysts and media close to Fidesz have expressed bafflement at the “ungratefulness of youth”.

“In the West, they are the most extremist, deviant, monsterlike, individualistic creatures, who believe in a neocommunist economic model,” wrote Zsolt Bayer, a Fidesz party member and chief ideologist infamous for his fiery views.

Right-wing news site 888.hu went as far as lecturing the young about the achievements of the government.

“If Fidesz was not in power, and Viktor Orban was not our prime minister, you wouldn’t have the time (to share your enviable life on Facebook), because you would have to go to work at the age of 18, to pay your monthly gas bill, your electricity bill and more.

But Fidesz insiders recognise that for many 18-year-olds, Orban and his party may look much like the old communist guard that was swept away in 1989 — eternal rulers in power for most of their lives.

Fidesz insiders recognise that for many 18-year-olds, Orban and his party may look much like the old communist guard — eternal rulers in power for most of their lives.

And there is no real sign of generational change in Fidesz on the horizon. For that, they need to look further. Much further.

The best news of the week came from Peter Szijjarto, the Hungarian Minister of Foreign Affairs and Trade, who told the European Space Agency’s congress in Seville that Hungary would send an astronaut to space by 2024.

Evidently, the mission will be equipped by the Russians. From January 1, the foreign ministry will incorporate the new National Space Exploration Fund and Hungary will pursue a more active role in space technology.

After all, there might be enemies out there, too.