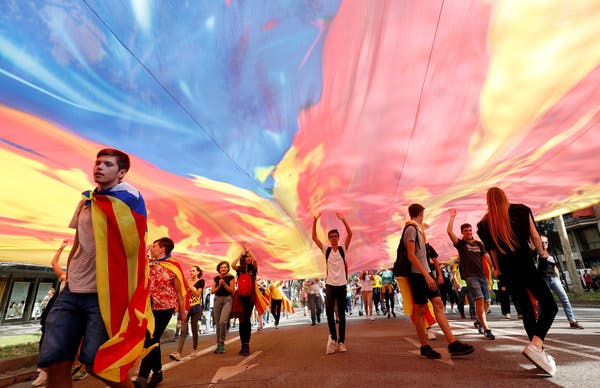 Turning Point: In Brexit negotiations, Britain’s prime minister, Boris Johnson, conceded that Northern Ireland could be treated as part of an all-island single market, with the same rules north and south of the border for farming, food production and manufacturing.

The global battle over borders reached a fever pitch this year. President Trump continued to push for hundreds of miles of wall between Mexico and the United States, India and Pakistan reignited a decades-old feud over Kashmir and Brexit threatened to upend all of Europe.

As these conflicts flare and intensify, it’s important to remember that many of the borders we’re fighting over were never fair or democratic to begin with. That is, they were not created by some inclusive process, but are rather products of wars, colonialism, treaties and royal marriages.

The Catalan economist and Columbia University professor Xavier Sala-i-Martin rightly pointed out in a 2018 interview that if someone from a Western democracy were to describe his society to visitors from Mars, they would likely be baffled to hear that we govern ourselves by a democratic system of laws and popular votes, yet leave our nations’ borders up to the whims of colonial treaties or the results of long-ago wars.

That’s not to say we need fewer borders, however. Otherwise, why not unite Spain and France and make Paris the capital? Or France and Germany, with Berlin as the capital? That would only result in more political and economic centralization in capital cities that are sucking up the financial and human resources of their countries, creating poverty and inequality.

We cannot understand Brexit, for example, without remembering that England is one of the most centralized nations in Western Europe. Similarly, in Spain, Madrid’s growing power and resources are depopulating many of the country’s already underfunded and aging rural areas.

In 2017, Catalonia held a referendum to determine its independence from Spain, for political, historical and economic reasons. Madrid rejected any effort to reach an agreement about it, and when the Spanish Constitutional Court — which many see as politicized — declared it unconstitutional, police officers directed by the Spanish government violently attacked voters as they tried to cast their ballots. Afterward, social leaders and some Catalan government officials were sent to prison and held without trial for two years, while four fled to exile with me. Just this October, nine of those still imprisoned were found guilty of sedition. They will spend between nine and 13 years in jail.

To me, the unity of the state always seemed important to Spanish politicians, but I never thought they would place unity above democracy or human rights, particularly now that Spain is in the European Union.

Spain’s authoritarian streak is being emulated by countries such as Turkey, whose government has justified the removal of Kurdish elected officials by saying that it was simply following Spain’s lead, and China, which has argued that the police violence in Catalonia legitimizes its crackdown on protesters in Hong Kong.

This undemocratic model of dealing with border disputes or independence movements sets a precedent that will inflame territorial problems around the world, validating institutional violence against minorities.

Catalonia’s 2017 referendum is a critical reminder of the importance of borders and the sovereignty of smaller states and autonomous regions in our modern world. Instead of enabling a lust for control, maintaining and updating our borders should be an exercise in democracy and decentralization, empowering marginalized populations by overturning boundaries that history has imposed on them.

Smaller states have more reasons than big ones to be peaceful and open to trade. Without an internal market on which to rely, small states must maintain good relations with their neighbors and partners around the world. It’s no coincidence that in Denmark and Sweden, even unions tend to support free trade agreements. And among the world’s 10 most prosperous and democratic countries, at least half have populations under 10 million and are global champions for human rights. They are concerned less with controlling territory than with improving the lives of their citizens.

To help regions like Catalonia find security and independence, we can look to the examples set by Britain and Canada. Allowing two referendums in Quebec, as Canada did in 1980 and 1995, or organizing a vote like the one Britain agreed to in Scotland in 2014, is not only proof of democracy at work, but also a primer for countries around the world on how fights over territory must be resolved.

Citizens should be at the forefront of redefining our world’s borders. If they can choose their own future, states that gain independence through nonviolent and democratic means will pave the way for liberal democracy to flourish around the world.

This is an article from Turning Points, a special section that explores what critical moments from this year might mean for the year ahead. Follow The New York Times Opinion section on Facebook and Twitter, and sign up for the Opinion Today newsletter.