"There has been a regression on women’s rights", Femen leader Inna Shevchenko 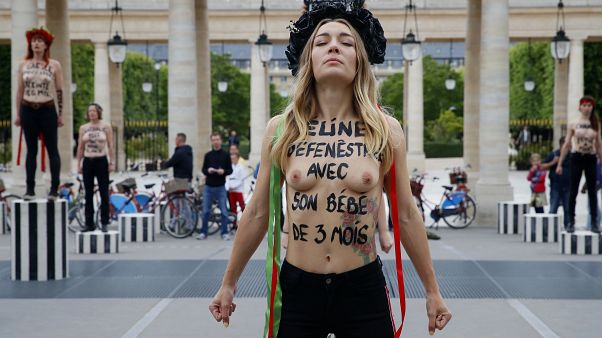 Sunday marked International Women's Day, we sat down with the leader of feminist activist group FEMEN, Inna Shevchenko, to talk about the ongoing struggle for women's rights, and the backlash against feminism.

About women's day itself she says, "It is as important as any other day of fight."

Shevchenko is one of the highest profile members of the group which has become notorious for their topless political protests.

"The only fact that people felt uncomfortable seeing a women's body in a political context, in an unusual sexual context, shows how deeply routed is this problem," Shevchenko says. "We still live in societies where a majority of people associates a women´'s naked body to a sexual body, to something that is sexual by definition".

Drawing the line over women's bodies as political is what defined FEMEN's philosophy, when they first began in 2008, but since then various feminist waves have taken up the torch. #METOO being one of them. But for Shevchenko, it is not a sign of success, but of a growing backlash.

SPONSORED CONTENT
What will be the new face of European agriculture in the coming years?
As Europe’s climate gets warmer and seasons are shifting, agriculture needs to adapt: climate data might be part of the answer. #ClimateNow
Ad By Copernicus

"I think that the fact that women are right now taking over the streets, that we are hearing their voices everywhere, it is also because there is a certain regression of women´'s rights. While we are right sitting here in this very moment, in Russia domestic violence is depenalised.... in Turkey parliament is proposing to discuss, debate and vote a legislation that would provide rapists a right to escape from any punishment if they marry their victim... femicides are taking place everywhere, in countries as Russia and Ukraine, as well in countries that I consider to be developed as the land of feminism, my country of exile, France."

"As long as money is involved in this process, it is a commodification of women and exploitation of women´'s bodies,"

"Religion as we know it, led by men, exclusively by men, built around a cult of a male God, is a manifestation of patriarchy in its pure form. "

"As in any other case whenever a woman takes over a powerful position in politics, I feel a certain level of joy and hope, yet...only when women who get to power are those women who chose to do women's politics, not play by male rules but change those rules and speak as women politicians, speak for women's values and play a women's game in politics, not a male one. Let's keep watching."

Inna Schevchenko was interviewed ahead of a talk at Amsterdam's De Balie venue on 8 March 2020.