The Spanish epidemic has become a painful example of the tendency of one government after another to ignore the experiences of countries where the virus has already struck. 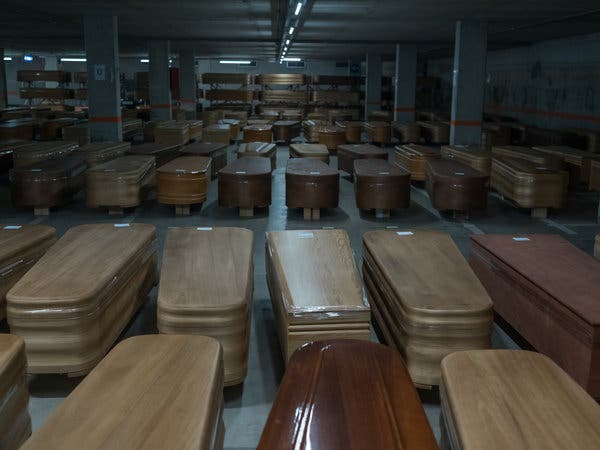 Coffins of coronavirus victims, to be buried or incinerated, were stored in the underground parking lot of a funeral home in Barcelona on Thursday.Credit...Samuel Aranda for The New York Times

MADRID — At the end of January, a German tourist became Spain’s first coronavirus patient. At the time, the health threat seemed for the nation as remote as the tiny Spanish island of La Gomera, where he was treated. Two weeks later, the German walked out of hospital, and Spain celebrated being again “virus free.”

It proved a very brief respite. But even as more cases surfaced, Spanish officials continued to stress that the coronavirus was being imported, notably onto another island by tourists from Italy, where hospitals were already under siege. The story line was that Spain faced an external threat, but did not risk a domestic epidemic.

But then on Feb. 26, a resident of Seville, who had not done any traveling, tested positive. A week later, another man in the region of Valencia became Spain’s first coronavirus victim, starting a grim count that is approaching 14,000 dead. Spain now ranks second in the world, behind the United States, in total number of cases.

Spain’s crisis has demonstrated that one symptom of the virus, by now as persistent as the fevers, aches and labored breathing it brings, has been the tendency of one government after another to ignore the experiences of countries where the virus has struck before it. 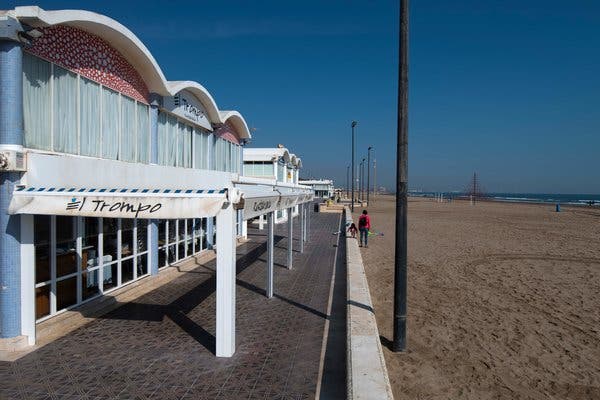 Starting with China, the virus has skipped across the globe, crossing the threshold of one million infections worldwide last week. But as in most nations, the Spanish authorities initially treated the virus as an external threat, rather than considering that their country could be the next domino to fall.

The epidemic has now forced Spaniards to confront the kind of struggle that could be recalled only by those old enough to have lived through the Spanish Civil War of the 1930s.

Health care unions are taking the authorities to court for not protecting them — more of their members have been infected in Spain than anywhere else in the world, sometimes even forcing doctors and nurses to use garbage bags in place of medical gowns. Patients have been sleeping in hospital corridors.

Over 12,000 health care workers have contracted Covid-19 in Spain amid grave shortages in personal protective equipment. Nurses and doctors showed us how they make their own gowns, masks and shields.CreditCredit...Courtesy of Alfonso Vidal

In Madrid, the country’s largest skating rink became an emergency morgue while its main exhibition center was turned into a field hospital, which opened in what health unions described as disastrous work conditions. In one of the most gruesome episodes in this crisis, Spanish soldiers found older residents abandoned or dead in their nursing home beds.

“It’s been shocking for a society to face a situation only known to those who remember Spain coming out of the war,” said Cristina Monge, a professor of sociology at the University of Zaragoza. For many others, she added, “this kind of scenario was until now pure science fiction.” 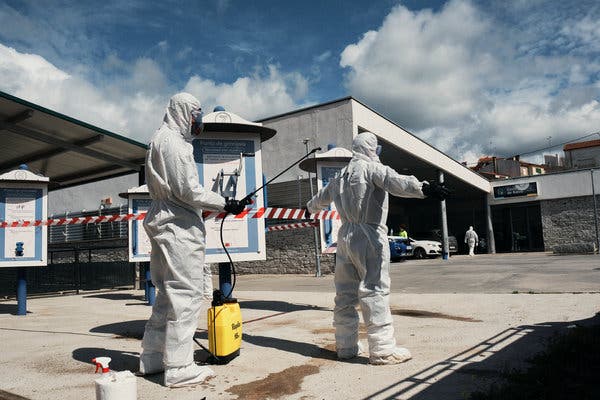 The Spanish Army was deployed in a remote village near Toledo to disinfect an outpatient clinic in March.Credit...Gianfranco Tripodo for The New York Times

As a result, the government of Prime Minister Pedro Sánchez has faced criticism for not prohibiting mass gatherings sooner, and for not stockpiling medical equipment as soon as the number of cases reached several hundred in northern Italy in late February.

Spanish officials have defended their actions by highlighting the shortcomings of other nations, and there is no doubt that Spain has company in its tragedy. But the progress of the virus in Spain has not been forgiving of the government’s response.

Even as Italy locked down its northern regions on March 8, Spain’s first coronavirus cluster had already emerged among participants of a funeral service. Mr. Sánchez’s government did not put the country under the highest level of alert and impose a nationwide lockdown until March 14.

Opposition politicians have since charged that it was too late. “Late in comparison with which countries?” Prime Minister Sánchez challenged lawmakers in Congress.

Italy, Britain and France, he noted, declared their own lockdowns only once they had more infections than Spain. He stressed that International Women’s Day, when 120,000 gathered in Madrid on March 8, had also been celebrated on the streets of Brussels, Berlin, Vienna and Paris.

The event has widely been blamed for catapulting the spread of the virus in the capital. Three Spanish government ministers who led the women’s rally later tested positive for the virus, as did Mr. Sánchez’s wife and mother.

“It is evident that with what we know today, all of us would have acted differently,” Mr. Sánchez said.

No doubt, the government’s response to the virus was complicated by the diffuse nature of Spain’s political system, in which the country’s 17 regions progressively gained more autonomy, including the management of hospitals, after Spain adopted a new Constitution in 1978. 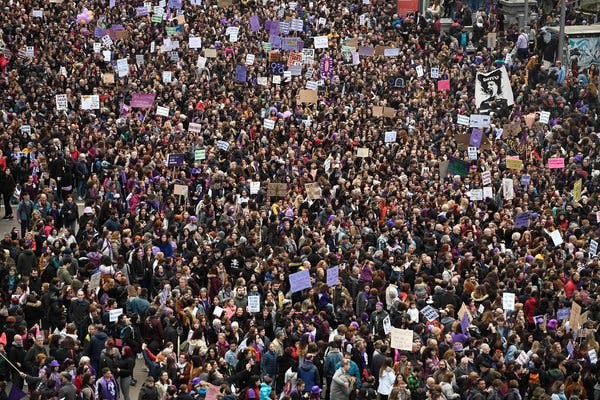 Even as the virus was spreading, the government allowed some 120,000 people to gather in Madrid to celebrate International Women’s Day last month.Credit...Pierre-Philippe Marcou/Agence France-Presse — Getty Images

It also did not help that the emergency was foisted on a new and fragile coalition government, Spain’s first. Mr. Sánchez barely scraped into office in January, after an inconclusive national election, and his Socialists now share power with their erstwhile rivals, the far-left Unidas Podemos party.

The coalition partners bickered over how much financial support Spain could afford to give to those left idle if ordered to stay home. By the time Mr. Sánchez declared a national lockdown, several regional politicians had already announced their own clampdown measures.

The gap between regional and national decision-making also encouraged many wealthy Madrid residents to hurry to their seaside homes, once all Madrid schools had been shut, at the risk of further spreading a virus that was already firmly embedded in Spain’s capital.

“A new and fragmented government starts with a huge disadvantage in this kind of crisis situation, because it requires quick and forceful decisions to be taken without constantly worrying about whether somebody else is gaining a political advantage,” said Toni Roldán, a Spanish economist and former lawmaker from the Ciudadanos party.

As a measure of the difficulties, Quim Torra, the separatist leader in northeastern Catalonia, refused even to sign a joint declaration with Madrid on coordinating the lockdown with the national government.

Fernando Rodríguez Artalejo, an epidemiologist and university professor, said Spain should not be judged harshly over its response to a pandemic that every government had passively watched unfold in a neighboring country “as if watching a movie.”

Spain watched Italy, he acknowledged, but with the mitigating factor that many scientists believed until recently that asymptomatic people were probably not contagious.

“The idea was that the authorities just needed to track the cases and identify the people whom they had been in contact with,” he said. “This doctrine is now gone, but too late for Spain.”

Even so, Spain’s main neighbor has fared much better so far. Despite sharing a 750-mile border with Spain, Portugal passed 200 coronavirus deaths last week just as Spain reached 10,000.

There, another Socialist minority government leader, Prime Minister António Costa, has seen opposition politicians close ranks behind him. Mr. Costa has been warning that Portugal could face more pain, but Dr. Rodríguez Artalejo said that Portugal so far deserved admiration.

“I think they acted efficiently and at the same time as us, but when their epidemic was not so widespread,” he said. 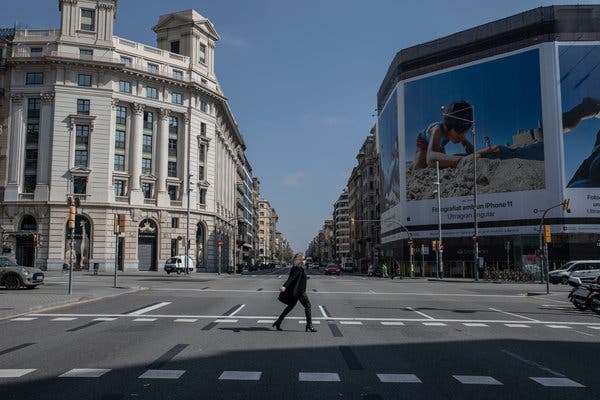 Passeig de Gracia, one of the most famous touristic sights of Barcelona, was nearly empty on March 14 after the government declared a nationwide lockdown.Credit...Maria Contreras Coll for The New York Times

The same solidarity has been sorely missing in Spain. As Madrid accounted for half of the nationwide death toll, Salvador Illa, the health minister, made “a call for solidarity with the Madrid region.”

But that did not lead to a significant shift of medical equipment from other regions, nor was there any follow-up on his suggestion that Madrid patients could be moved to less affected regions.

By contrast, France’s government has been evacuating some patients by high-speed train from Paris and other saturated regions.

“I think each region has acted independently, and that makes any coordination or solidarity initiative very difficult,” said Carlos Rus, the president of ASPE, an association that represents Spain’s private hospitals.

The procurement of emergency equipment has been especially dire. The problem was highlighted when the health ministry acquired, via an undisclosed Spanish intermediary, 640,000 test kits from a Chinese company whose initial shipment proved unusable.

“We are working within a robust and large health care system that unfortunately gets slowed down by plenty of bureaucracy, including when it comes to buying anything,” said Ángela Hernández Puente, a doctor and labor union official in Madrid.

The coronavirus has spurred a worldwide debate about how each government measures its impact, particularly since many countries have done minimal testing for the virus. Governments have also differed in how they count their coronavirus dead, for instance by ignoring those who never entered a hospital.

But even amid such confusion, Spain’s testing regime has been opaque.

Guadalupe Moreno, who works for Statista, a German data company, said she considered Spain’s testing data to be too incomplete to feature in her comparative research.

“It seems that the Spanish authorities are themselves no longer clear about how many tests are being conducted in Spain,” she said.

Even so, about 15 percent of Spain’s population is estimated to already have been infected — by far the highest proportion among 11 European countries included in a recent study by scientists from Imperial College London.

The biggest victims of the confused response, beyond those left sickened or dead by the virus, are Spain’s doctors and nurses, who themselves have been infected in staggering numbers. 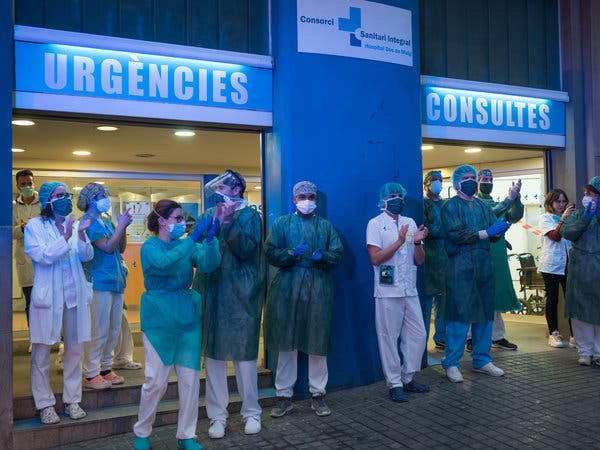 Medical workers in Barcelona returning applause to residents who have applauded them. Health care professionals have denounced the failure of their authorities to protect them adequately.Credit...Samuel Aranda for The New York Times

They have received an outpouring of solidarity and daily applause from the balconies of Spain’s 47 million confined residents, the vast majority of whom have respected a strict lockdown that will last until at least April 26.

“This crisis is likely to strengthen the horizontal bonds in our society, between citizens who are making big sacrifices, while weakening further the vertical one with the leadership at the top,” forecast Narciso Michavila, a sociologist and the president of GD3, a Spanish polling firm.

Damage from the distrust may already have been done. In one of his company’s recent surveys, published in the newspaper ABC, almost two-thirds of people accused the government of hiding information about the epidemic.

“No politician can be held responsible for creating this crisis,’’ Mr. Michavila said. “But some probably will be blamed for pouring oil rather than using a bucket of water to put out the fire.”

The Coronavirus in Spain
Virus Knocks Thousands of Health Workers Out of Action in Europe
March 24, 2020 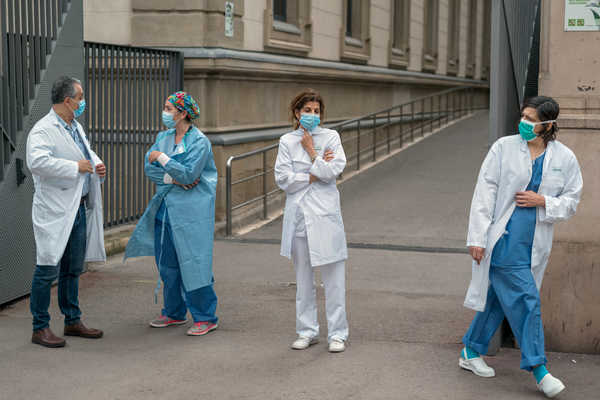 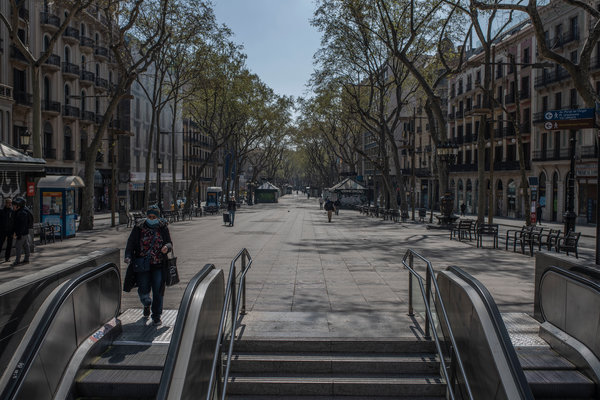 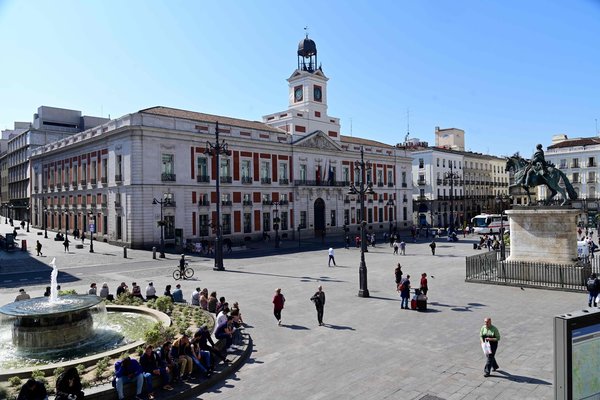 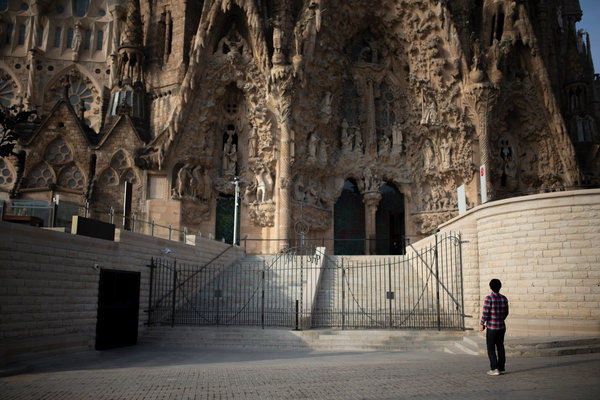 An earlier version of a picture caption with this article attributed an erroneous distinction to Valencia, Spain. It was the site of the country's first coronavirus death, not its first case.