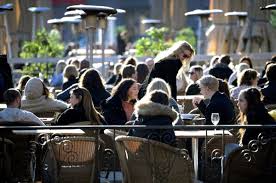 It’s a question of liberty, not epidemiology

From magazine issue: 4 April 2020, The Spectator

Who would have thought that Sweden would end up being the last place in Europe where you could go for a beer? We have, in our normalcy, suddenly become an exotic place. Other countries are closing their cities, schools and economies, but life in our corner of the world is surprisingly ordinary. Last weekend I went to the gym, met up with friends, and sat in the spring sun at outdoor cafés.

My foreign friends are stunned. They can’t fathom that there are still people enjoying the fruits of civilisation, as if the natural reaction to pandemics is to embrace totalitarianism. And they wrestle with another conundrum: how on earth did Sweden end up being the final bastion of liberty? How did this country of mild-mannered conformists end up rebelling against lockdown culture?

In the past, most Swedes felt comfortable with the nanny state giving us orders — telling us how many slices of bread to eat per day, for instance. We still close off-licences at 3 p.m. on a Saturday. The general idea is that if people were given the freedom and responsibility to figure out these things on their own, anarchy might follow.

We worry about Covid-19 a lot. Many people work from home. Restaurants are open, but not bustling. Keeping two metres apart at bus stops is something Swedes were pretty good at before the crisis: we don’t need much encouragement now. We’re careful. But our approach to fighting the pandemic starts from something more fundamental: in a liberal democracy you have to convince and not command people into action. If you lose that principle, you will lose your soul.

Stefan Löfven, Sweden’s centre-left premier, has dismissed calls for a lockdown, saying ‘we can’t legislate and ban everything’. He’s no evangelist for libertarian principles, and may yet bring in harder measures. But so far he’s been saying that ‘we all, as individuals, have to take responsibility’ and not just wait for the government to lock us up.

At the centre of our debate is Anders Tegnell, the ‘state epidemiologist’, and Johan Giesecke — an epidemiology don (and one of Tegnell’s predecessors) who has captured the country’s attention with his no-messing attitude. Both advise caution — and common sense. As in Britain, many scientists have appealed to the government to close schools and impose curfews. Unlike in Britain, the authorities have calmly responded by explaining how this wouldn’t really help. They publish their own models of the virus spread. It shows how many people will need hospital care: the system, they say, can cope. And when asked, they say they don’t think Imperial College has made a better call.

Perhaps Tegnell and his team will turn out to be wrong. But their point is that the people deserve policies that work for longer than a month. Managing the virus is a long game, and while herd immunity is not the Swedish strategy, it may well be where we all end up. The theory of lockdown, after all, is pretty niche, deeply illiberal — and, until now, untested. It’s not Sweden that’s conducting a mass experiment. It’s everyone else.

The main advice from Tegnell et al is repeated like a mantra ten times a day: be sensible. Stay at home if you feel sick. Oh, and wash your hands. But individuals, companies, schools and others are trusted to figure out on their own what precautions to take.

This Swedish exceptionalism is about principle, not epidemiology. It’s true that we’re perhaps less at risk due to our high rate of single-person households and low number of smokers. Closing the schools would, as well, have a bigger impact in a country where almost all mums are working mums. But frankly, all these explanations miss the point: yes, they make us different to Italy and Spain, but not to Denmark, Finland and Norway. Sweden simply made the call to take measures that don’t destroy the free society.

Isn’t the real question why other countries aren’t doing the same? Viktor Orban has just grabbed power from Hungary’s parliament and can run the country by decree — indefinitely. Protests against this ring hollow, because Boris Johnson, Emmanuel Macron and Angela Merkel have suspended core freedoms and rights in their own countries. Yes, I know they are different from Orban, but he’ll ask: how different? Doesn’t Derbyshire now have police drones chasing those who go for a walk?

It’s the first time in my adult life when it is possible to imagine totalitarianism in the West. Equally frightening is the strength of the panic-ridden ‘totalitarian outlook’. There is growing intolerance of dissent; and — as Orwell wrote in ‘The Prevention of Literature’ — people censure themselves because of ‘the dangerous proposition… that intellectual honesty is a form of anti-social selfishness’.

There are many experts in epidemiology and virology who are highly critical of the lockdown strategy. Few are willing to talk on record. There are public health experts arguing that suppression methods will kill more people than the virus. But they struggle to speak plainly, mostly out of fear of the social media mob. Many economists think it is mad to close down entire national production. But they tiptoe around their message because such opinions are threatening the mood of national cohesion.

How long will Sweden hold out for? It’s unclear. We can expect our Covid-19 death figures to rise faster than our neighbours’ — still all within the confines of a bad winter flu, but these graphs can scare people. A fifth of the population wishes us to become like the rest of Europe, with a full lockdown. But the vast majority, for now, want Sweden to keep its cool. We don’t want to remember 2020 as the time when we caused irreparable harm to our liberties — or lost them entirely.

Fredrik Erixon explains the Swedish strategy on The Edition podcast (18:50):