"PHARMA. Greed, Lies, and the Poisoning of America", Gerald Posner 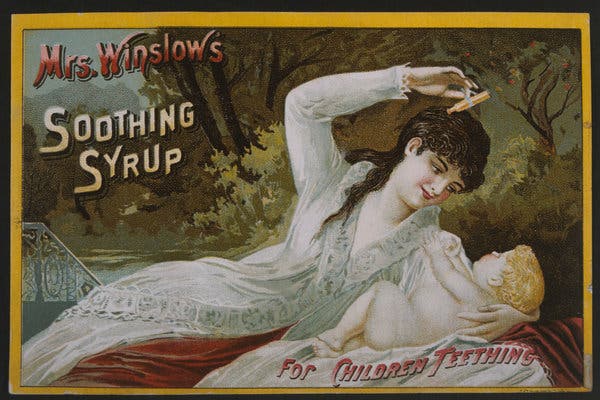 PHARMA
Greed, Lies, and the Poisoning of America
By Gerald Posner

In 1900, Bayer, the German pharmaceutical company that had developed aspirin, introduced a much stronger brand of pain killer in the United States. The new drug was called heroin, a name derived from the German word for “heroic.” The company promoted it as a treatment for an array of ills: colds, coughs, asthma, epilepsy, multiple sclerosis, stomach cancer, schizophrenia. It also advertised heroin as safe for children. And anyone over 18 could buy it, Gerald Posner notes in a new book, “Pharma: Greed, Lies, and the Poisoning of America.”

“The highly addictive nature of their products,” he writes of drugmakers at the turn of the 20th century, “coupled with no government oversight and regulation, was good for sales.”

Bayer was hardly the only company at the time touting risky products as panaceas. Posner describes how the makers of Kopp’s Baby Friend, a popular potion for quieting colicky infants, scoured newspapers for birth announcements and then sent mothers free samples. The giveaway aimed at mothers was an early precursor of a consumer-influence technique known today as “targeted marketing.” The mothers who received the “Baby Friend” freebies, however, did not know that the formula contained alcohol and morphine sulfate, ingredients that could be poisonous to babies. Dozens of infants died.

Posner draws on these incidents to introduce the idea that, in the early days of the pharmaceutical industry at least, it could be difficult to distinguish drugmakers from snake oil purveyors.

Posner is an investigative journalist and the author of a dozen books including “Case Closed,” a re-examination of the assassination of John F. Kennedy, and “Mengele,” an account of the botched hunt for the Nazi war criminal. In “Pharma,” he similarly focuses on crimes and misdemeanors, this time committed by drugmakers starting in the early 1900s — with their outrageous marketing of addictive medicines like opioids — and concluding more than a century later, full circle, with their deliberate downplaying of the risk of modern-day opioids.

The focus on drug industry profiteering marks this book as the latest entry in a growing canon of Big Bad Pharma books. The category already includes contemporary industry overviews like “The Truth About the Drug Companies,” by Dr. Marcia Angell, a former editor in chief of The New England Journal of Medicine, along with narrower works like “Bottle of Lies,” which focuses specifically on the makers of generic drugs. What distinguishes “Pharma” from these earlier efforts is that the author sets himself the task of writing a bigger, more ambitious tome. 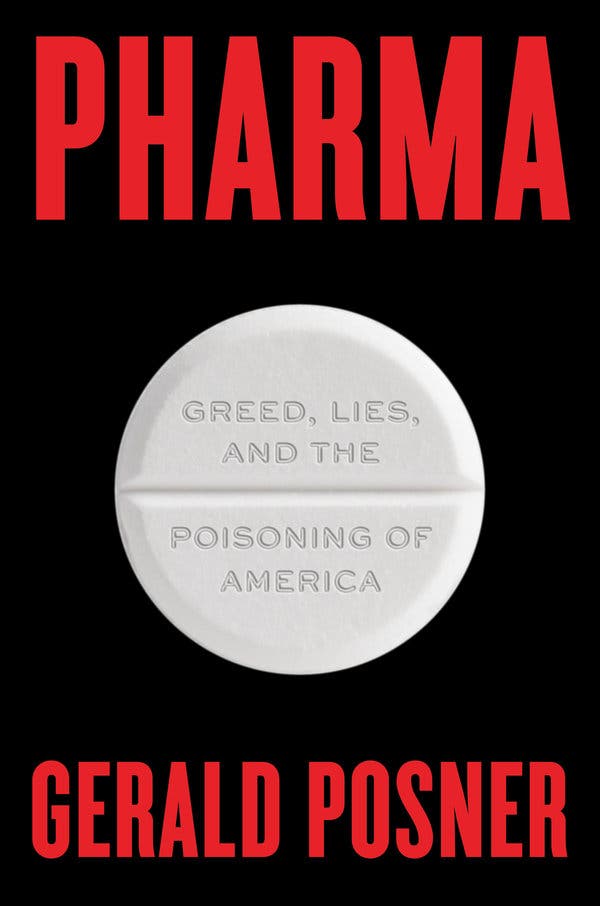 Posner envisions “Pharma” as a definitive history of the pharmaceutical industry “in its entirety” in a single volume. After all, he argues, people cannot really understand how firms like Bayer, Merck and Pfizer evolved into “sprawling pharma conglomerates that sell a trillion dollars of drugs annually” without understanding their early histories as pioneer peddlers of then-legal heroin and cocaine.

The result is a withering and encyclopedic indictment of a drug industry that often seems to prioritize profits over patients. Over 550 densely packed pages, Posner tells a tireless and occasionally tiring tale that reads like a pharmaceutical version of cops and robbers. There are chapters on the discovery and popularization of drugs for anxiety, for menopause, for pain management — each following a similar narrative arc. First, the author exposes how drug companies pushed medical, ethical and legal boundaries, often causing more public harm than health benefit. Then he describes lawmakers and regulators scrambling to catch up and rein in the drugmakers. And repeat.

One of the most telling episodes involves antibiotics. The mass production of penicillin during World War II helped pharmaceutical companies throw off their reputations as addictive drug pushers and rebrand themselves as producers of innovative, lifesaving products. The drugmakers also reaped massive profits from penicillin. And they were eager to earn even more, “Pharma” explains, by patenting broad-spectrum antibiotics that might be used for all kinds of health conditions. It was a retro strategy, harking back to the cure-all claims the companies had made decades earlier to promote narcotics like morphine. And it worked.

Posner recounts how many doctors came to view super antibiotics as their drugs of choice — not only for proven uses like treating bacterial infections, but “even prophylactically at the first signs of a fever, earache, scratchy throat or runny nose.” One researcher, he writes, “estimated that overenthusiasm about the new drugs meant they were prescribed unnecessarily more than 90 percent of the time.” That overeagerness drowned out troubling reports of allergic reactions to the drugs, fungal infections and the risks of antibiotic resistance. But the Food and Drug Administration, established in 1906 to oversee product safety, did not intervene, Posner notes, because its commissioner at the time did not want to be seen as an obstacle to lifesaving medications.

By 1950, pharmaceuticals had became the most profitable industry in the United States. But the mass adoption of antibiotic “wonder drugs” had opened a schism. Industry veterans, including the chief executive of Merck, insisted that medicines should be developed for people first, not for profit. Upstarts like John McKeen, the chairman of Pfizer, Posner writes, took the opposite view, arguing that it was not worth investing in drugs that would not generate substantial revenue.

In 1951, McKeen decided to use the launch of Terramycin, the company’s new broad-spectrum antibiotic, to develop a playbook for creating a blockbuster drug. For that he turned to Arthur M. Sackler, a hard-charging advertising executive who had trained as a doctor — and who decades later would become known as one of the three brothers behind Purdue Pharma, the developer of OxyContin, the painkiller at the center of the current opioid abuse epidemic.

McKeen allotted $7.5 million for the Terramycin campaign, an unheard-of sum for medical marketing at the time. Sackler used the funds for a novel saturation-marketing campaign, adapting Madison Avenue’s techniques for selling consumer goods for his own “Medicine Avenue” advertising methods. Along the way, Sackler also reset the ethical boundaries of medical marketing. “Pharma” reveals how he started one company to plant drug promotions, disguised as articles, in popular newspapers and magazines — and co-founded another company, IMS Health, to track doctors’ prescribing habits the better to influence them. It shows how the marketing maverick hired and co-opted a director of the F.D.A.’s antibiotics division to support unproven medical ideas favorable to the industry. And it exposes a misleading Sackler-produced advertising campaign that used fake doctors to promote precarious combinations of antibiotics.

Sacklers’s aggressive, and often transgressive, marketing techniques would radically remake the drug industry, contributing over the decades to the overprescription of drugs like Valium, menopause treatments, painkillers and antidepressants, ultimately resulting in untold health harms. Indeed, Purdue Pharma, the drug company owned by the Sackler brothers, adapted those influence techniques in the 1990s to deceptively market OxyContin, an opioid with a slow-release mechanism, Posner writes.

“Pharma” relates how the company promoted the drug to regulators and doctors as a safer, more effective and less addictive opioid — even as executives knew it was a highly addictive product that led many people to suffer severe withdrawal symptoms and even turn to drugs like heroin when they could not get their prescriptions renewed. Posner blames the ensuing opioid abuse epidemic, which has led to the deaths of tens of thousands of Americans, in part on “the addictive drugs that 150 years earlier were the core DNA of the pharmaceutical industry.”

That is ultimately a reductive argument. If Big Pharma is still addicted to the century-old idea of producing “staggering profits from their highly addictive products,” it’s difficult to imagine a viable rehab for the industry. Perhaps that’s why “Pharma” devotes so many words to industry malfeasance and only one sentence at the end to a possible “multidisciplinary solution.”

Natasha Singer covers the intersection of technology, business and society for The New York Times. Previously, she reported on the pharmaceutical industry and medical ethics.