The former king’s departure, which comes as he faces financial inquiries, may fuel Spain’s political and social debate over the future of the monarchy. 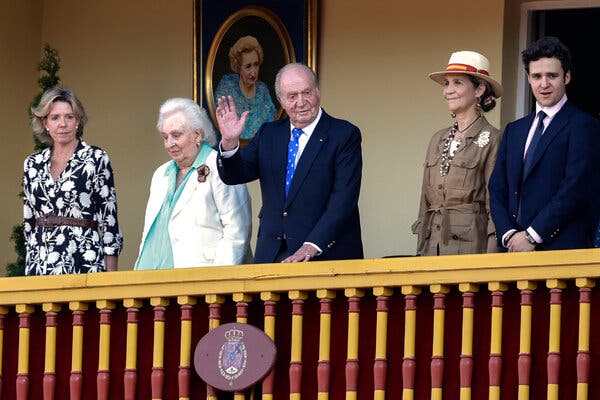 The former king of Spain, Juan Carlos, center, announced on Monday he was leaving Spain amid inquiries into financial improprieties.Credit...Andrea Comas/Associated Press

The former king of Spain, Juan Carlos, announced on Monday he was abandoning his country amid a Spanish court investigation into a lucrative business contract and a separate money laundering and tax evasion probe in Switzerland.

In a letter released by the royal household and addressed to King Felipe VI, his son and Spain’s current monarch, Juan Carlos said that his decision to leave amid the multiple inquiries was taken “with the same eagerness to serve Spain that inspired my reign.”

In a brief response, King Felipe thanked his father and stressed the importance of his legacy, while at the same time underlining Spain’s adherence to the rule of law and the values enshrined in its Constitution.

In 2014, King Juan Carlos abdicated in favor of his son, amid health problems and a series of personal scandals that were already undermining the reputation of Spain’s monarchy.

But six years later, Juan Carlos, 82, has continued to cast a long and troublesome shadow over the royal household, as his mounting judicial problems have also been accompanied by a steady flow of embarrassing media stories about his past lifestyle and personal wealth.

His departure could fuel Spain’s political and social debate over the monarchy, with Spain’s left-wing deputy prime minister, Pablo Iglesias, describing the decision of Juan Carlos to leave as a “flight abroad,” which he called “unworthy of a former head of state.”

Juan Carlos’s troubles come as the integrity of other members of European royal households has been questioned.

Federal prosecutors in New York have accused Prince Andrew of Britain of refusing to assist in their investigation into allegations of sex trafficking and other crimes by the financier Jeffrey Epstein. In January, King Albert II, the former monarch of Belgium, was forced to acknowledge fathering a child after years of lawsuits.

Juan Carlos left his residency in the Zarzuela royal palace, on the outskirts of Madrid, but he did not say to which foreign country he would relocate, nor did he discuss what his decision would mean for his wife, Queen Sofia.

The departure of Juan Carlos follows recent efforts by his son to distance himself from his father’s activities. In March, King Felipe VI renounced his personal inheritance from his father, and also stripped his father of his stipend, amid a money laundering investigation launched by a Swiss prosecutor and focused on two separate offshore foundations. 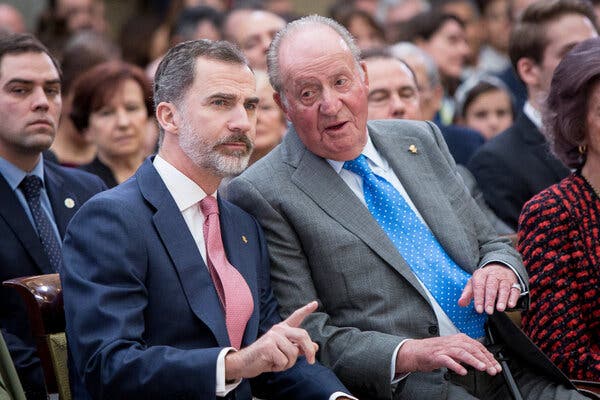 One of the foundations being investigated, Zagatka, was registered in Liechtenstein and set up by Álvaro de Orleans-Borbón, a cousin of Juan Carlos. Prosecutors are trying to determine how the foundation came to accumulate its sizable wealth and why it moved money between undeclared bank accounts.

The other foundation, the Panama-based Lucum, received $100 million from Saudi Arabia. Prosecutors are now trying to establish whether this money was somehow connected to the awarding of a contract that Spanish companies won to build a high-speed rail link between the Saudi cities of Medina and Mecca.

As part of the probe into a Swiss private bank account held by Lucum, a Geneva prosecutor, Yves Bertossa, has questioned a lawyer and a fund manager who had links to Juan Carlos, as well as a former companion, Corinna zu Sayn-Wittgenstein. King Juan Carlos has not himself been placed under investigation in Switzerland, but his son, King Felipe, cut ties with Lucum after finding out that he had been named as a beneficiary of the fund.

Spain then launched its own investigation, in part based on information shared by the Swiss prosecutor about the large payment made by Saudi Arabia to Lucum.

It is unclear what the former monarch’s departure will mean for his legal problems. The chances of Juan Carlos appearing in court in Madrid were slim, as he continues to benefit from legal immunity.

Spain’s government said on Monday that it respected the decision of Juan Carlos to leave the country. But the monarchy has also been a point of divergence between the two parties that came into office in January to form Spain’s first coalition government.

The junior coalition partner, Unidas Podemos, wants Spain to become a republic, a view that is also supported by some smaller left-wing or regional political parties.

Mr. Iglesias, the deputy prime minister and leader of Unidas Podemos, on Monday urged Juan Carlos to answer to the Spanish judiciary and the Spanish people.

But the Socialist Party of Prime Minister Pedro Sánchez recently joined right-leaning parties to vote down in Parliament a proposal from Unidas Podemos to investigate Juan Carlos’s wealth.

Juan Carlos was praised as a key participant in Spain’s return to democracy, having come to the throne in 1975, two days after the death of the country’s authoritarian leader, Gen. Francisco Franco. In 1981, the king helped stop a military coup by making a televised broadcast in which he ordered soldiers to return to their barracks.

“I think we should separate what happened in the first decades of the reign of Juan Carlos from what has been going on recently, but of course people tend to remember more the recent events,” said Carmen Enríquez, who has written books about the Spanish royal family.