The comments by former officers, and some current ones, struck a raw nerve in a country that had been ruled by a military dictatorship. 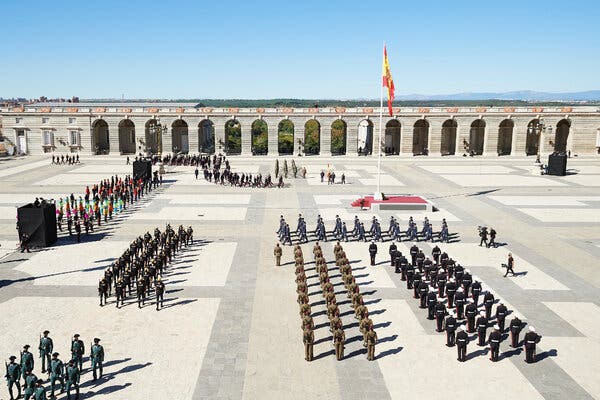 MADRID — Earlier this month, 271 former members of Spain’s armed forces used the anniversary of the country’s Constitution to issue a manifesto criticizing the left-wing coalition government and warning that Spain’s unity was under threat.

The manifesto was published shortly after chats were leaked to the Spanish news media in which retired air force officers described Gen. Francisco Franco, Spain’s former dictator, as “the irreplaceable one” and gave a thumbs up to the suggestion that left-wing Spaniards be shot. Some of the retired officers also sent letters to King Felipe VI attacking the government led by the Socialist prime minister, Pedro Sánchez.

Although the defense minister and the chief of the armed forces said the statements did not represent the views of the active military, the bold foray into politics by former officers prompted the government to take legal action and worried analysts in a country that was led by a military dictatorship until 1975.

This past week, the left-wing Spanish newspaper Público published screen shots from another leaked WhatsApp group chat in which active members of an artillery unit shared Fascist salutes and threatening comments.

Spain’s defense minister, Margarita Robles, sent the contents of the retired air force officers’ WhatsApp chat to public prosecutors to determine whether there had been criminal violations of the Constitution.

The defense chief of staff, Gen. Miguel Ángel Villarroya Vilalta, reasserted “the political neutrality of our armed forces” in a statement and warned that inappropriate private messages hurt “the image of the armed forces,” even if they came from retired officers.

“The opinions of these people cannot be considered to represent the collective to which they once belonged,” he said.

The Interpreter: Original insights, commentary and discussions on the major news stories of the week.

José Antonio Martín Pallín, a former judge of the Spanish Supreme Court, said in a phone interview that he did not see grounds to prosecute over the contents of a private chat but did see justification in revoking a military honor, the Order of San Hermenegildo, from those involved because “this order requires exemplary behavior.”

The royal household forwarded the letters received by King Felipe VI to the government, but Mr. Martín Pallín argued that “the king should have publicly said something forceful against this missive.” Overall, he added, “It’s clear to me that there are now serving officers who uphold anti-democratic values, even if I’m not saying their views are shared by the whole army.”

The growing influence of the far right within the military has also become an issue in other countries, notably Germany, and coincides with a push by governments to restrict individual rights, like freedom of movement, because of the pandemic.

“Spain has its own singularity within what I see as a worrying Western trend of many people increasingly accepting the ideas and the need for authoritarianism,” said Josep Ramoneda, a philosopher and columnist. “Unsurprisingly, the military is particularly fertile ground for authoritarianism.”

José Ignacio Domínguez, a former air force officer who refused to sign the letter that his cohorts had prepared for King Felipe, said that it was an attempt “to get our king to intervene and help overthrow the government.”

Even if the letter was signed by retirees, he said the political leanings of the current armed forces were increasingly those of Spain’s far-right party, Vox. Last year Vox became the third-largest party in Parliament, winning 15 percent of the vote and performing above its national average in provinces with large military bases. 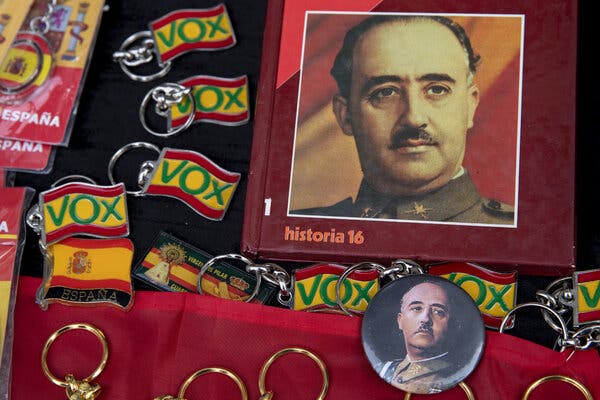 After Franco’s death in 1975, Spain’s transition to democracy “left the army completely untouched,” Mr. Domínguez noted, “so it’s not surprising that Spain’s new far-right party has found strong supporters among the many officers who continue to consider that they form a Pretorian guard and don’t seem to understand that they should obey whatever government has been democratically elected.”

Spain removed an equestrian statue of Franco from its main military academy in Zaragoza only in 2006, which means that “every one of our army generals got to walk past an enormous statue of our former dictator during two years of his military training, something that would be unthinkable in any other modern democracy,” Mr. Domínguez said.

Luis Gonzalo Segura, a former army lieutenant and anticorruption whistle-blower, said that the messages exchanged by the former officers made clear that “the only thing that stopped them from calling for a coup d’état is that this would not be seen favorably by the Spanish population and would be opposed by the rest of Europe.”

The leaked chat by former air force officers called for the shooting of “26 million sons of bitches,” an apparent reference to the more than half the Spanish population they said did not share their right-wing views.

Mr. Segura was expelled from the army in 2015 for breaching military discipline after he publicly accused his superiors of corruption and other misdeeds.

Even though Spain’s armed forces were not affected by the transition process after Franco’s death, Mr. Ramoneda, the columnist, noted that their role was significantly altered in the 1980s by three events: a failed military coup in 1981, a sweeping Socialist election victory in 1982 and Spain’s entrance into NATO that year, “which forced our most senior military commanders to dilute their political views, particularly since they suddenly got very proud to rub shoulders with their counterparts from larger modern armies.”

Before Vox’s emergence, Mr. Ramoneda argued, the secessionist challenge in Catalonia, which reached a boiling point in 2017, “is what really changed the mood in the armed forces, giving many a new sense of their role as defenders of Spain and its unity.”

A version of this article appears in print on Dec. 28, 2020, Section A, Page 10 of the New York edition with the headline: Spain Shudders as Military Ex-Officers Scorn Government and Praise Franco. Order Reprints | Today’s Paper | Subscribe
volver