Although the pandemic has been a unifying force in much of Europe, parties seeking to create a breakaway state for Catalonia received a majority of votes in a regional election. 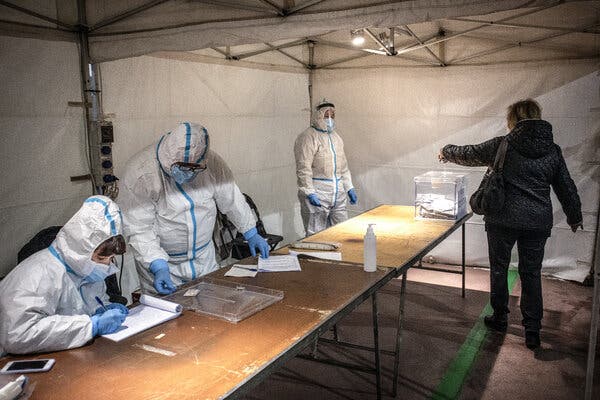 Voting in the Catalan elections in Barcelona on Sunday.Credit...Finbarr O'Reilly/Getty Images

By Nicholas Casey and Raphael Minder

MADRID — For years, Spain’s government dismissed the separatist movement in the Catalonia region as little more than a “soufflé” — easy to inflate but then collapsing in on itself.

Yet the movement shows no signs of imploding anytime soon, even amid a pandemic that has bridged divides elsewhere in Europe.

In a regional election on Sunday, parties seeking to create a breakaway state for Catalonia — the part of northeastern Spain that includes Barcelona — increased their majority in the regional Parliament. They began negotiations this week to form a coalition.

Election turnout was sharply reduced by the coronavirus, but the final tally showed pro-independence parties receiving a majority of votes — a prize that had long eluded them.

“From a pro-independence point of view, this is something to celebrate,” said Adrià Alsina, a Barcelona political analyst who supports breaking away from Spain. “It’s one less argument for those who are against independence and say we never got a majority.”

Catalan independence, once a pipe dream of a small group of people, has arguably been Spain’s most polarizing issue for almost a decade. The standoff reached a boiling point in 2017, when the region’s separatist government organized an independence referendum. It went ahead even after Spain’s courts declared it illegal and the police cracked down on voters.

The referendum was followed by a declaration of independence, which prompted Spain’s central government to oust the Catalan government and charge its members with crimes including sedition. Some of them fled Spain to avoid prosecution, while others ended up in prison.

Tensions heightened in Catalonia this week on another front after the police arrested a popular rapper, Pablo Hásel, in the town of Lleida. Mr. Hásel, 32, whose real name is Pablo Rivadulla Duró, faces nine months in prison on charges that his rap lyrics glorified terrorism and denigrated the monarchy. Protests in support of him began on Tuesday in Barcelona, Madrid and other cities, and have turned violent.

Before Sunday’s vote, the central government led by Prime Minister Pedro Sánchez dispatched its health minister, Salvador Illa, to run in the regional election on a platform that focused on remaining in Spain. He resigned his post in the national government and tried to capitalize on the prominence he had gained recently as the face of the government’s response to the pandemic’s health crisis.

The strategy reaped some dividends: While Mr. Illa did not receive enough votes to form a governing coalition, his party garnered more support than any other.

The results also pointed to moderation within the pro-independence camp. Among the pro-independence parties, voters favored Esquerra Republicana, a moderate left-wing party that has propped up Mr. Sánchez’s government in Madrid, but remains firm that it wants an independent state.

“There has been an advance of those who are more inclined to a dialogue with the government,” Ms. González Laya said.

After the vote, Spain’s government said an independence referendum was not on the cards, even as separatist politicians in Catalonia insisted that the demand should be at the heart of any future negotiation with Madrid.

But one issue that appears more open for discussion is whether Madrid could pardon nine politicians and activists who were jailed for orchestrating the secession attempt in 2017.

Carles Puigdemont, the president of Catalonia’s regional government at the time, fled the country to evade prosecution. He now lives in Brussels and has since been elected as a member of the European Parliament. He is fighting an attempt to lift his immunity as a member of that body, which could allow Spain’s judiciary to make a fresh attempt to extradite him.

Jordi Cuixart, one of the politicians seeking amnesty after being sentenced to nine years in jail, said that “Spain has a democracy, but it still maintains an anti-democratic attitude.” He said he not only wanted to be released from prison, but was asking the government to absolve him and the others of any wrongdoing.

If there is any resolution to the independence question, it will take time, said Sandra León, a political scientist at the Carlos III University in Madrid.

While the moderate independence wing is likely to be in the driver’s seat, Mr. Puigdemont’s more hard-line party, Together for Catalonia, is likely to be part of the regional government as well.

Vox, a Spanish far-right party that has made its anti-independence stance a central issue, will also join Catalonia’s Parliament for the first time, likely fueling further polarization, Ms. León said.

Catalan separatists are closely following movements elsewhere in Europe, particularly in Scotland, where the drive for independence has been reignited by Britain’s withdrawal from the European Union. The Scots voted against independence in a 2014 referendum that was authorized by London, but then also voted against Britain’s exit from the European Union.

“The independence movement is here to stay,” said Josep Ramoneda, a Catalan columnist and philosopher. “Sooner or later, somebody in Madrid will have to recognize that.”

Nicholas Casey is the Madrid bureau chief, covering Spain, Portugal and Morocco. He spent a decade as a foreign correspondent in Latin America and the Middle East and wrote about national politics during the 2020 U.S. presidential campaign. @caseysjournal

Raphael Minder covers Spain and Portugal, based in Madrid. He previously worked for Bloomberg News in Switzerland and for the Financial Times in Paris, Brussels, Sydney and finally Hong Kong. @RaphaelMinder

A version of this article appears in print on Feb. 20, 2021, Section A, Page 10 of the New York edition with the headline: Despite Spain’s Hopes Movement Would Fade, Catalonia Separatists Gain Ground. Order Reprints | Today’s Paper | Subscribe
volver