In a Surge of Military Flights, China Tests and Warns Taiwan

For two straight days, Beijing sent a record number of planes near the island, Taiwan said, a display of strength that underscored Chinese demands for unification 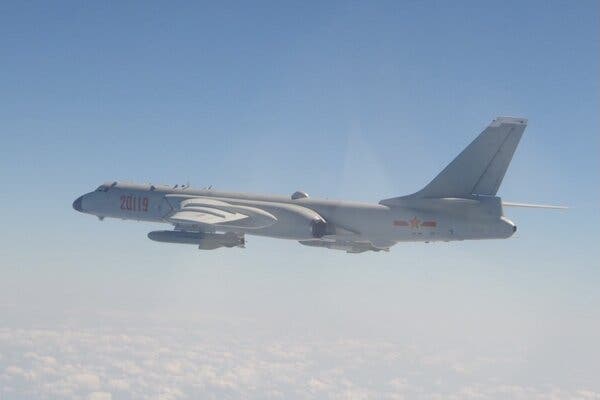 An undated photo from Taiwan’s defense ministry showing a Chinese H-6 bomber. The ministry said H-6 bombers were among the planes that China flew near the island on Friday. Credit...Taiwan Ministry of National Defense

By Chris Buckley and Amy Qin

Record-breaking numbers of Chinese military planes probed the airspace near Taiwan over the weekend, prompting Taiwanese fighter jets to scramble and adding muscle to Beijing’s warnings that it could ultimately use force to take hold of the island.

The sorties by nearly 80 People’s Liberation Army aircraft on Friday and Saturday, as China observed its National Day holiday, followed a pattern of Beijing testing and wearing down Taiwan by flying over seas southwest of the island. The most recent flights stood out because of the number and types of planes involved, including bombers and anti-submarine planes on nighttime intrusions.

The flights did not suggest an imminent threat of war over Taiwan, said several analysts, but they did reflect Beijing’s increasingly unabashed signaling that it wants to absorb the self-ruled island and will not rule out military means to do so.

“Coming on Oct. 1, China’s National Day, it sends a message about Beijing’s determination to claim Taiwan, by force if necessary,” said Adam Ni, an Australian analyst of Chinese military policy who is based in Germany. “The aim of this is to assert Beijing’s power and show military muscle.”

Taiwan’s Ministry of National Defense said that the spike in flights began on Friday, when 38 Chinese military planes flew into the island’s “air defense identification zone.”

The first group of aircraft included two H-6 bombers and 22 fighter jets, according to the Taiwanese ministry. That night, another two H-6 bombers, accompanied by 10 J-16 fighters, flew into the air zone, turned left off the southern end of Taiwan and headed northeast, parallel to the island’s eastern coast, before turning back, it showed on a map.

On Saturday, 39 Chinese military planes — including fighter jets, two anti-submarine aircraft and an early-warning-and-control plane — entered the Taiwanese zone, again breaking the daily record, the ministry said. On Sunday, it said, 16 more planes, including a dozen fighter jets, cut into a corner of the same area of the zone.

Taiwan’s air identification zone dates to the 1950s, laying out the airspace where the island’s authorities assert the right to tell entering planes to identify themselves and their purpose. It is a much larger area than Taiwan’s sovereign airspace, which reaches 12 nautical miles from its coast. The Chinese flights did not enter that sovereign airspace.

“It is very worrying,” said Chieh Chung, a security analyst with the National Policy Foundation in Taipei, Taiwan’s capital. “This puts a lot more pressure on our military, and the more they reach into our airspace, the greater the risk of some kind of accident.”

Taiwan’s defense ministry began regularly releasing records of Chinese military flights into the space in September of last year. Chinese military planes now enter the zone nearly every day, and the latest waves have barely ruffled most people in Taiwan. Officials on the island sounded more worried, however.

“Threatening? Of course,” Taiwan’s foreign minister, Joseph Wu, said on Twitter after the spike of intrusions began on Friday. In answer to questions about the Chinese flights, the Taiwanese defense ministry said on Sunday that it was “maintaining a high degree of vigilance and responding appropriately to ensure national security.”

The U.S. State Department condemned what it called China’s “provocative military activity near Taiwan.” Ned Price, a spokesman for the department, said on Sunday that the action was “destabilizing, risks miscalculations, and undermines regional peace and stability.”

Taiwan’s military responded to the latest Chinese flights by sending its own fighter jets into the air to monitor, but not confront, the planes. The strain of responding to China’s regular intrusions is wearing on Taiwanese pilots and aircraft, and it could be affecting the island’s overall vigilance, experts said. 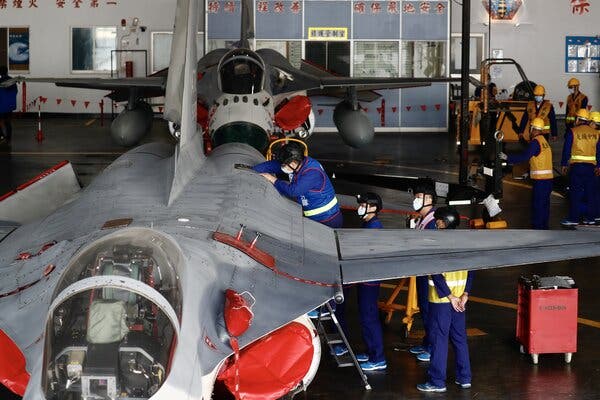 Mechanics from Taiwan’s air force working on a fighter jet in January. Credit...Ritchie B Tongo/EPA, via Shutterstock

“What I think is clear is that they’re having some success wearing down Taiwan with this operational tempo,” Zack Cooper, a senior fellow at the American Enterprise Institute who studies Chinese and regional military issues, said in an interview. “It’s tough on the pilots, it uses gas, which is expensive, and these air frames — the more you use them, the quicker they age.”

The Chinese government has said nothing about the flights, while official Chinese news outlets cited the Taiwanese reports that they had set a record.

The flights “clearly and unmistakably displayed China’s sovereignty over Taiwan,” the Global Times, a pugnaciously nationalist Chinese newspaper, said in an editorial, adding, “The greater the number of combat planes gathering together, the more it shows that our military is forming a powerful wartime aerial assault force.”

China’s flights into the Taiwanese zone usually feature slower-moving reconnaissance and anti-submarine aircraft, as well as fighter jets, according to records compiled by Gerald C. Brown, a defense analyst in Washington. But this year, Mr. Brown’s data indicates, the Chinese air force has sent bombers more often — an intimidating step, because they could more likely carry out a real attack.

The large-scale night flights also suggested that Chinese pilots had honed their abilities to fly their J-16 fighter jets in darkness, said Su Tzu-yun, a senior analyst at the Taipei-based Institute for National Defense and Security Research, which is backed by Taiwan’s government.

“They are trying to show all-weather capability,” said Mr. Su. “They want to show that they can fight battles in the daytime and try to strike at nighttime.”

By the end of 2019, China had around 1,500 fighter jets and 450 bombers and attack planes, according to the Pentagon’s 2020 report on the People’s Liberation Army. Taiwan had 400 fighters and no bombers.

Taiwan’s security increasingly depends on the United States, which provides most of its weapons. Under a 1979 law, the United States could intervene in an attempted military takeover of Taiwan, but it is not obliged to do so.

Sometimes, China’s flights into Taiwan’s air zone appear to be a warning in response to specific events. Last year, Beijing sent 37 warplanes toward Taiwan over a two-day span that featured a visit to the island by a U.S. official and a memorial service for Lee Teng-hui, a former president who completed Taiwan’s transition to democracy and was loathed by Beijing for asserting the island’s self-determination.

Apart from the Chinese National Day, it was difficult to discern a particular reason for the latest spike in flights.

The latest incursions occurred during a traditionally sensitive period, as Taiwan has been preparing to mark its own national holiday, on Oct. 10. And they came as countries in the West have been expressing increasing support for Taiwan, including for its recent application to join a major regional trade pact. On Monday, a delegation from the French Senate is scheduled to begin a visit to Taiwan.

Beijing, which bristles against anything that lends Taiwan the appearance of sovereign nation status, has expressed its opposition to both the application and the visit.

“The Chinese government is trying to draw a red line for the international community warning them not to support Taiwan,” said Wang Ting-yu, a legislator from Taiwan’s governing Democratic Progressive Party who is on the foreign affairs and national defense committee.

“To Taiwan, we are well prepared for this kind of harassment,” Mr. Wang added. “Our people, we don’t like it, but we also don’t worry about it.”

China and Taiwan
China Sends Warplanes to Taiwan Strait in a Show of Force to Biden
Jan. 24, 2021
China Sends Warning to Taiwan and U.S. With Big Show of Air Power
Sept. 18, 2020
U.S. Pushes Large Arms Sale to Taiwan, Including Jet Missiles That Can Hit China
Sept. 17, 2020

Chris Buckley is chief China correspondent and has lived in China for most of the past 30 years after growing up in Sydney, Australia. Before joining The Times in 2012, he was a correspondent in Beijing for Reuters. @ChuBailiang

Amy Qin is an international correspondent covering the intersection of culture, politics and society in China. @amyyqin