In Kazakhstan’s Street Battles, Signs of Elites Fighting Each Other

The reasons for the bloody crisis in Central Asia remain murky, but experts say popular discontent could mask an old-fashioned power struggle within the ruling faction.

Dozens of antigovernment demonstrators were killed and hundreds injured after protests began Sunday over a surge in fuel prices.

BISHKEK, Kyrgyzstan — It came as no big surprise when a crumbling oil town in western Kazakhstan stirred in protest last Sunday, 10 years after security forces there killed more than a dozen workers who had gone on strike over pay and poor conditions.

But it remains a mystery how peaceful protests over a rise in fuel prices last weekend in Zhanaozen, a grimy, Soviet-era settlement near the Caspian Sea, suddenly spread more than a thousand miles across the full length of Central Asia’s largest country, turning the biggest and most prosperous Kazakh city into a war zone littered with dead bodies, burned buildings and incinerated cars.

The violence this week in Almaty, Kazakhstan’s former capital and still its business and cultural hub, shocked just about everyone — not only its leader, who, fortified by Russian troops, on Friday ordered security forces to “fire without warning” to restore order, but also government critics who have long bridled at repression and rampant corruption in the oil-rich nation.

The crisis coincided with a power struggle within the government, fueling talk that the people fighting in the streets were proxies for feuding factions of the political elite. There is also feverish speculation about Kremlin meddling and a host of other murky possible causes. About the only thing that is clear is that the country’s convulsions involve more than a straightforward clash between protesters expressing discontent and the heavy-handed security apparatus of an authoritarian regime.

With Kazakhstan now largely sealed off from the outside world — its main airports are closed or commandeered by Russian troops, while internet services and phone lines are mostly down — information is scarce.y The New York Times

Echoing the refrain of repressive leaders around the world confronted with protests, President Kassym-Jomart Tokayev on Friday lashed out at liberals and human rights defenders, lamenting that the authorities had been too lax.

Not many people are buying that, particularly as it is a message endorsed by Russia, which on Thursday sent in troops to help Mr. Tokayev regain control and has a long record of construing all expressions of discontent at home and in other former Soviet territory as the work of disgruntled liberal troublemakers.

But there is growing evidence that the mayhem in Almaty, the epicenter of this week’s turmoil, was more than just people power run amok.

President Tokayev, in an address to the nation on Friday, alluded to that, claiming that the violence was the work of some 20,000 “bandits” who he said were organized from “a single command post.” Calls for negotiations with such people, he added, were “nonsense” because “they need to be destroyed and this will be done.”

Sign up for updates on the unrest in Kazakhstan:  Every evening, we will bring you a roundup of our latest Kazakhst

Danil Kislov, a Russian expert on Central Asia who runs Fergana, a news portal focused on the region, speculated that the chaos was the result of “a desperate struggle for power” between feuding political clans, namely people loyal to President Tokayev, 68, and those beholden to his 81-year-old predecessor, Nursultan Nazarbayev. 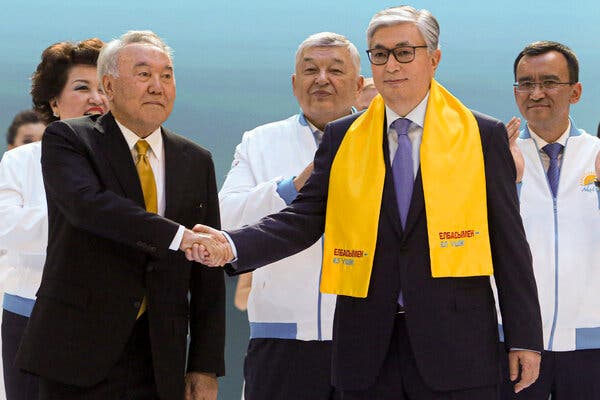 President Kassym-Jomart Tokayev, right, and Nursultan Nazarbayev, the former president of Kazakhstan, in 2019 in Nursultan, the new capital.Credit...Alexei Filippov/Associated Press

At the height of the tumult on Wednesday, the president announced that he had taken over as head of the security council, a job held until then by Mr. Nazarbayev, who stepped down as president in 2019 but retained wide powers and was given the honorary title of Elbasy, or leader of the nation. President Tokayev also fired Mr. Nazarbayev’s nephew Samat Abish as deputy head of the main security service and purged several others close to the former president.

The riots in Almaty, Mr. Kislov said, appeared to be an attempt by members of Mr. Nazarbeyev’s political clan to reverse their eclipse.

“This was all artificially organized by people who really had power in their hands,” he said, adding that Mr. Nazarbayev’s ousted nephew seems to have played a major role in organizing the unrest.

Galym Ageleulov, a human-rights activist in Almaty who took part in what began as a peaceful demonstration on Wednesday, said police officers monitoring the protest suddenly vanished around lunchtime. And “then this crowd came,” he said, an unruly mob of what seemed more like thugs than the kind of people — students, bookish dissidents and middle-class malcontents — who usually turn out for protests in Kazakhstan. 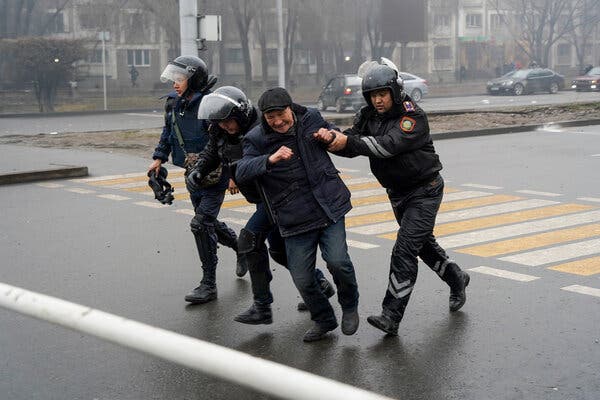 Police officers detaining a demonstrator during a protest on Wednesday in Almaty.Credit...Vladimir Tretyakov/Associated Press

He said the mob was “clearly organized by crime group marauders” and surged down main streets toward Akimat, the City Hall, setting cars on fire and storming government offices.

Among those who urged the crowd on was Arman Dzhumageldiev, known as “Arman the Wild,” by reputation one of the country’s most powerful gangsters, who witnesses said provoked much of the violence. He gave frantic speeches on Almaty’s central square as government buildings blazed behind him, calling for people to press the government to make concessions and mocking as a “coward” Mukhtar Ablyazov, an exiled tycoon who is a bitter personal enemy of Kazakhstan’s longtime former president, Mr. Nazarbayev.

Secretary of State Antony J. Blinken told reporters in Washington on Friday that the United States still has questions about Mr. Tokayev’s request for military reinforcements from a Russian-led alliance. “It’s not clear why they feel the need for any outside assistance, so we’re trying to learn more about it,” he said.

“One lesson in recent history is that once Russians are in your house, it’s sometimes very difficult to get them to leave,” Mr. Blinken added.

Understand the Protests in Kazakhstan

What’s happening? Protests in Kazakhstan sparked by anger over surging fuel prices have intensified into deadly clashes over the future direction of the autocratic Central Asian country. Here’s what to know about how the protests started and why they matter:

What led to the protests? The protests began when the government lifted price caps for liquefied petroleum gas, a low-carbon fuel that many Kazakhs use to power their cars. But the frustration among the people runs deep in regards to social and economic disparities.

What do the protesters want? The demands of the demonstrators have expanded in scope from lower fuel prices to a broader political liberalization by seeking to oust the autocratic forces that have ruled Kazakhstan without any substantial opposition since 1991.

Why does the unrest matter outside this region? Until now, the oil-rich country has been regarded as a pillar of political and economic stability in an unstable region. The protests are also significant for Vladimir Putin, who views Kazakhstan as part of Russia’s sphere of influence.

How has the government responded? President Kassym-Jomart Tokayev has called the protesters “a band of terrorists,” declared Kazakhstan under attack and asked the Russian-led military alliance to intervene. Officials have instituted a state of emergency and shut off internet access.

That a possible power struggle could have morphed so quickly into mayhem on the streets is a measure of how brittle Kazakhstan is beneath the shiny surface of wealthy, cosmopolitan cities like Almaty.

Discontent, even if exploited by political elites, is very real. The country is less repressive than most in a region dominated by brutal strongmen — the former dictator of neighboring Uzbekistan, Islam Karimov, was accused of boiling his critics in vats of oil and having hundreds of protesters massacred in the town of Andijan in 2005.

But whatever the relative tolerance of their leaders, many Kazakhs still resent a kleptocratic elite that has poured billions into showcase projects like the construction of a new capital, named Nursultan in honor of the former president, while neglecting the well-being of many ordinary people. 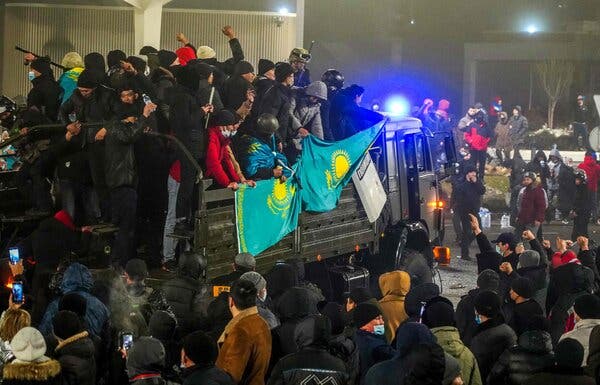 Protesters on the streets of Almaty on Wednesday.Credit...Abduaziz Madyarov/Agence France-Presse — Getty Images

The roots of that discontent are in places like Zhanaozen, the western oil town where this week’s protests began — and where security forces in December 2011 opened fire on a group of striking workers. Unlike protests in Almaty, those in Zhanaozen and other western towns along the Caspian Sea, the center of the Kazakh oil industry, have been peaceful throughout the week.

The region’s senior official, Zhanarbek Baktybaev, said on Friday that there had been no violence, lamenting that “as you know, in some region of our country there have been riots and looting by terrorist elements.” Vital services, he said, were all working normally.

Mukhtar Umbetov, a lawyer for the independent trade union in Aktau, next to Zhanaozen, said by telephone that protests had continued with no violence in the west of the country, and expressed the anger of ordinary workers over rising inflation and stagnant salaries.

Shocked by violence a decade ago in western Kazakhstan, a country that Washington regarded as a stable and dependable partner, the Senate and House held a joint hearing attended by experts on the country, including a former U.S. ambassador there, William B. Courtney. 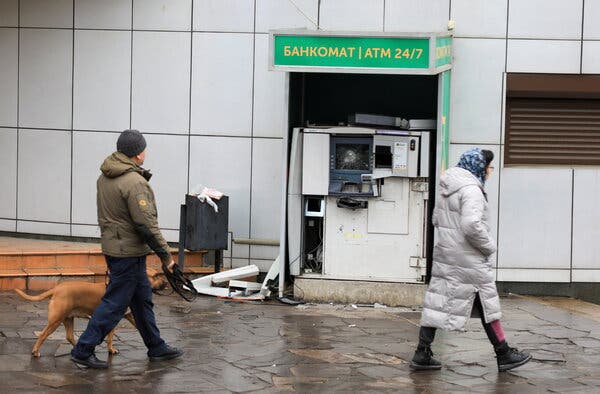 An ATM that was damaged during the unrest in Almaty, Kazakhstan’s largest city.Credit...Pavel Mikheyev/Reuters

Mr. Courtney described the December 2011 bloodshed “as an aberration” but “symptomatic of the wide gap between rulers and ruled, between reality and expectations, between those who live honestly and those who do not.” Kazakhstan’s political development, he added, “is stunted by 20 years of authoritarian rule.”

The title of the hearing: “Kazakhstan: As Stable as its Government Claims?” If nothing else, the events of the past week have at least answered that question.

Ivan Nechepurenko reported from Bishkek, and Andrew Higgins from Warsaw. Reporting was contributed by Valerie Hopkins in Moscow, Marc Santora in London and Michael Crowley in Washington.

Ivan Nechepurenko has been a reporter with the Moscow bureau since 2015, covering politics, economics, sports, and culture in Russia and the former Soviet republics. He was born and raised in St. Petersburg, Russia. @INechepurenko • Facebook

Andrew Higgins is the bureau chief for East and Central Europe based in Warsaw. Previously a correspondent and bureau chief in Moscow for The Times, he was on the team awarded the 2017 Pulitzer Prize in International Reporting, and led a team that won the same prize in 1999 while he was Moscow bureau chief for The Wall Street Journal.