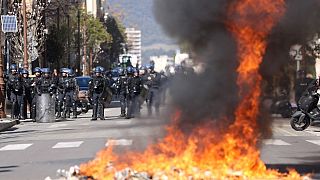 Several people have been injured amid violent clashes between police and protesters on the French island of Corsica.

Demonstrations have taken place for several days after a prominent nationalist figure was attacked in prison last week.

Yvan Colonna, a convicted murderer and Corsican independence activist, was left in a coma after reportedly being strangled in the prison's gym.

Investigators say he was attacked by another prisoner, who was sentenced on Islamic terrorism charges.

The attack prompted anger from students, nationalist organisations, and trade unions who have accused the state of bearing responsibility.

Multiple fires broke out at the courthouse in the city of Ajaccio as around 400 students gathered. At least 40 people -- mostly police officers -- were injured on Wednesday night after the sixth evening of protests.

Five people were arrested after the "rioting," local officials said in a statement.

A number of French politicians, including the president of the National Assembly Richard Ferrand and former president François Hollande, have called for calm.

"The government is very committed to Corsica, has done a lot for Corsica, and we must find ways of appeasement on this particular subject," Ferrand told franceinfo.

"Prime Minister [Jean Castex] is on the task and I know that the elected representatives of Corsica are also," he added.

The leader of the far-right National Rally, Marine Le Pen, has criticised French Justice Minister Eric Dupond-Moretti and has called for his resignation.

In a speech in Paris, Le Pen said that she "understood" the "anger" of the protesters and accused Dupond-Moretti of "gross misconduct".

She also labelled the violence "scandalous" and called for "finding ways of peace".

In 2003, Colonna was convicted of the 1998 murder of French prefect Claude Erignac after spending five years on the run and living as a Corsican shepherd. He has been serving a life sentence in Arles on the French mainland.

He has long appealed to be moved back to Corsica, but France had refused and described him as a "detainee of particular concern" (DPS). This status was lifted on Tuesday by Prime Minister Castex but the move has so far failed to appease protesters.

According to France’s top anti-terror prosecutor, the suspect confessed to attacking his fellow prisoner, saying he had been angered by “blasphemous statements”.