upended diplomacy in the Arctic

The invasion has upended diplomacy in the Arctic, where Russia sought resources. 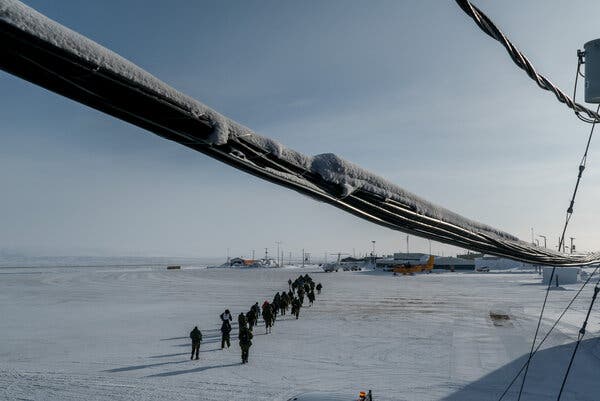 Canadian soldiers took part in the Nanook-Nunalivut exercises in 2019, meant to get troops up to Russian levels of readiness in extreme cold.Credit...Andrew Testa for The New York Times

Russia’s invasion of Ukraine has upended diplomacy in the Arctic, a historically neutral region where the Kremlin has in recent years sought to take advantage of climate change’s effects to reach oil, gas and coal reserves, open up trade routes and bolster its military forces.

The suspensions come not only in the wake of Russia’s invasion of Ukraine, but also amid competing claims between Russia and Canada over 222,000 square nautical miles of the Arctic seabed, according to estimates by Philip Steinberg, a professor at Durham University in Britain. The contested region is about three times the size of Britain. Russia has also challenged Denmark’s claim to a comparably large portion of the seabed and, in recent years, expanded its military presence and icebreaker fleet there.

While the Arctic Council gave no reason for suspending its work, member nations, including Canada, cited the war as a roadblock to cooperating with Russia. A statement from Canada’s foreign ministry said Russia’s “flagrant violation” of Arctic Council principles and international law through its “unprovoked invasion” of Ukraine had caused a breakdown in cooperation.

An idea of “Arctic exceptionalism” — that nations can work together in the Arctic without the tensions of other foreign relations — has long held sway in many Northern Hemisphere nations. In 1987, the Soviet leader Mikhail S. Gorbachev called for the Arctic to stay “a zone of peace,” and in the decades since, scientists, environmentalists and others have largely cooperated in the region.

But analysts say that with climate change and Russia’s invasion, the notion needs to be re-examined.

“We need to rethink some of the assumptions about what we’re confident the Russians won’t do,” said David Perry, the president of the Canadian Global Affairs Institute, an international research group based in Calgary, Alberta. “That would include re-evaluating the assumptions about whether or not we can treat the Canadian Arctic as somehow strategically distinct from a number of other places on the planet.”

The war will present a “profound setback” to Russia’s ambitious agenda in the Arctic, said Whitney Lackenbauer, a professor at Trent University in Peterborough, Ontario, and federal research chair in the study of the Canadian North.

Russia, which has the longest Arctic coastline of any country, has tried to take advantage of climate change’s effects on Arctic ice by prospecting for resources and gaining shorter trade routes to the West. Those ambitions also appear to be impeded by the war.

“Any idea that the Russian leadership may have had that they could enjoy business as usual in the Arctic space has been proven to be tremendously naïve,” Professor Lackenbauer said.

Russia is in the first year of a two-year term as the Arctic Council chair, a position that is rotated among member countries, which also include Canada, Denmark, Finland, Iceland, Norway and Sweden.

After the council announced its suspension last week, the Inuit Circumpolar Council, an organization that represents 180,000 Inuit people in Alaska, Canada, Greenland and Russia, issued a statement saying that it was “concerned about the future of the Arctic Council.”

Canada withdrew from council meetings after leaders of its three northern territories said, in a letter to Prime Minister Justin Trudeau, that they were “increasingly concerned about Arctic defense and security” because of the war.

Three European organizations that collaborate on Arctic affairs — the Nordic Council of Ministers, the Council of the Baltic Sea States and the Barents Euro-Arctic Council — also announced that they were suspending cooperation with Russia.

Analysts said that Russia’s invasion of Ukraine could prompt Canada, the United States and other nations to change their presence in the Arctic.

Professor Lackenbauer said Russia’s actions would be “a catalyst” to modernize the North American Aerospace Defense Command, a partnership between Canadian and American military forces for monitoring and alerting against aerial and marine attacks. NORAD’s leadership had expressed concerns about whether existing Arctic defense efforts were an adequate answer to Russia’s increased military presence.

Russia has revitalized its own presence in the Arctic in recent years, said Rob Huebert, a professor and researcher at the University of Calgary’s Center for Military, Security and Strategic Studies.

Along Russia’s northern coast, the Kremlin has updated approximately 18 air bases from the Cold War era, Professor Huebert said. The Kola Peninsula, where Russia keeps its Northern Fleet, harbors the bulk of the country’s nuclear deterrence and capabilities.