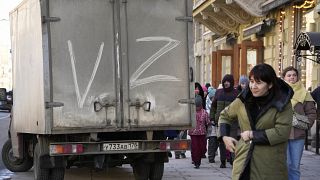 The letters V and Z have become symbols of the Russian military.   -   Copyright  AP Photo

Latvia's parliament has approved a ban on displaying the Russian military 'Z' symbol following its invasion of Ukraine.

MPs voted on Thursday to prohibit people from displaying symbols of military aggression and war crimes at public events.

The Latvia parliament (Saeima) said in a statement that changing the law on public events was "urgent".

"The letters 'Z', 'V', or other symbols used for such purposes have no place in public events," he added.

Latvia had already banned symbols that promote or glorify Nazi or communist regimes, except where they are used for "educational, scientific or artistic purposes".

Citizens are now also prohibited from holding any events within 200 metres of any monument commemorating the Soviet army or its occupation of Latvia after the Second World War.

In the last month, the 'Z' symbol has become a common sight on Russian military vehicles and pro-Kremlin social media accounts.

Russia's defence ministry has also used the letter 'V' in connection with the war in Ukraine. Neither letter exists in the Russian alphabet.

Ukraine's Foreign Minister Dmytro Kuleba has called for a universal ban on the political use of the letter 'Z' following the invasion.

Lawmakers in another Baltic country Lithuania are also debating a ban on the black and orange Georgian ribbon and the 'Z' symbol.

Federal authorities in Germany have also welcomed announcements by some states to investigate whether individual instances of the “Z” use constitute criminal acts.

Ivan Kuliak: Russian gymnast wears Z to back invasion as he appears alongside Ukrainian Kovtun Illia