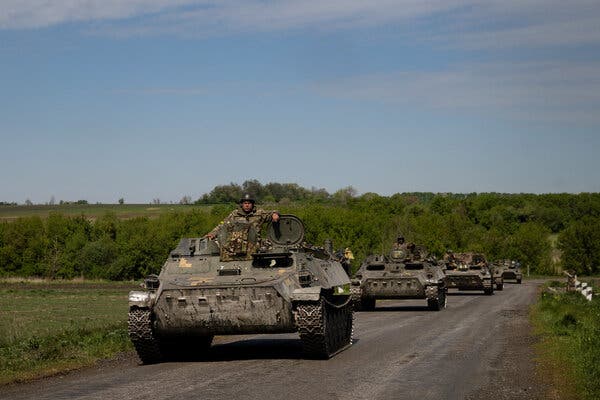 A convoy of Ukrainian armored vehicles near the frontlines in the Donetsk region on Thursday.Credit...Lynsey Addario for The New York Times

The declaration by Finland’s leaders that they will join NATO — with expectations that neighboring Sweden would soon do the same — could now reshape a strategic balance in Europe that has prevailed for decades. It is the latest example of how Russia’s invasion of Ukraine 11 weeks ago has backfired on Mr. Putin’s intentions.

Russia reacted angrily, with Mr. Putin’s chief spokesman, Dmitri S. Peskov, saying the addition of Finland and Sweden to NATO would not make Europe safer. Russia’s deputy U.N. ambassador, Dmitry Polyanskiy, appeared to go further, saying in an interview with a British news site he posted on Twitter that as NATO members, the two Nordic countries “become part of the enemy and they bear all the risks.”

Finland, long known for such implacable nonalignment that “Finlandization” became synonymous with neutrality, had been signaling that Russia’s Feb. 24 invasion of Ukraine was giving the Finns a reason to join NATO. But Thursday was the first time Finland’s leaders said publicly that they definitely intended to join, making it all but certain that Russia would share an 810-mile border with a NATO country.

The addition of Finland and Sweden to NATO carries significant risks of elevating prospects of war between Russia and the West, under the alliance’s underlying principle that an attack on one is an attack on all. 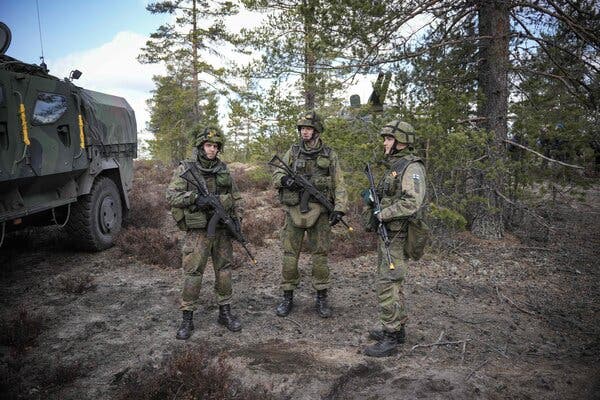 But the Finnish leaders, President Sauli Niinisto and Prime Minister Sanna Marin, said that “NATO membership would strengthen Finland’s security,” adding that “as a member of NATO, Finland would strengthen the entire defense alliance.”

Mr. Putin has offered a range of reasons for his full-scale invasion of Ukraine, but it was intended in part to block the eastern expansion of NATO and was premised on what he apparently had assumed would be a fractious European response. Instead, the invasion has united the West and helped to isolate Moscow.

With the likely redrawing of Europe’s security borders, Western officials also moved to reshape Europe’s economic infrastructure by taking steps to establish new transport routes from Ukraine, which is under a Russian naval embargo. Russia, meanwhile, found itself further ostracized from the global economy as Siemens, the German electronics giant, became the latest company to pull out of Russia, exiting after 170 years of doing business there.

The European Union announced a set of measures on Thursday to facilitate Ukraine’s exports of blocked food products, mainly grain and oilseeds, in a bid to alleviate the war’s strain on the Ukrainian economy and avert a looming global food shortage.

The Russian navy has blocked exports by Ukraine — a major global supplier of wheat, corn and sunflower oil before the invasion — at the country’s Black Sea ports. The long-term goal of the European Commission, the bloc’s executive branch, is to establish new transport routes from Ukraine into Europe, circumventing the Russian blockade by using Polish ports — although creating new routes could take months, if not years. 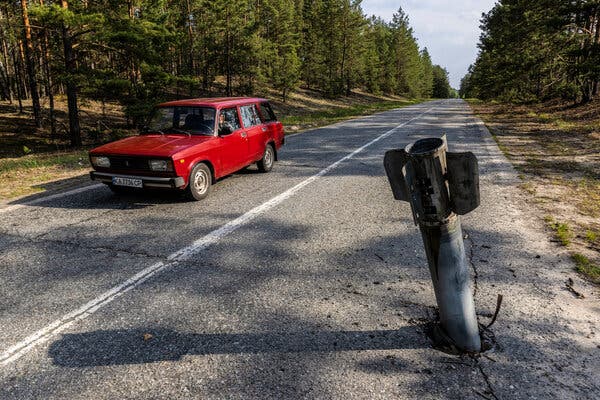 A motorist passing an unexploded Russian rocket near Kuhari, northwest of Kyiv, on Thursday.Credit...David Guttenfelder for The New York Times

On the ground in Ukraine, where the Russian invaders are still facing strong resistance from Western-armed Ukrainian forces and the prospect of a prolonged war, the Kremlin redeployed troops to strengthen its territorial gains in the Donbas, the eastern region where the fighting has been fiercest.

Ukrainian and Western officials say that Russia is withdrawing forces from around Ukraine’s second-largest city, Kharkiv, where it has been losing territory — a pullback that Britain’s Defense Ministry on Thursday described as “a tacit recognition of Russia’s inability to capture key Ukrainian cities where they expected limited resistance from the population.”

By contrast, in the Luhansk and Donetsk regions, which together make up the Donbas, the Russians now control about 80 percent of the territory. In Luhansk, where Russian shelling rarely relents, “the situation has deteriorated significantly” in recent days, according to the regional governor, Serhiy Haidai.

“The Russians are destroying everything in their path,” Mr. Haidai said on Thursday in a post on Telegram. “The vast majority of critical infrastructure will have to be rebuilt,” he said, adding that there was no electricity, water, gas or cellphone connection in the region, where most residents have fled.

Russia’s withdrawal from Kharkiv represents of one of the bigger setbacks Moscow has confronted since its retreat from areas near Kyiv, the capital — where the costs of Russian occupation became clearer on Thursday.

The bodies of more than 1,000 civilians have been recovered in areas north of Kyiv that were occupied by Russian forces, the United Nations human rights chief, Michelle Bachelet, said on Thursday. They included several hundred who were summarily executed and others who were shot by snipers, Ms. Bachelet said. 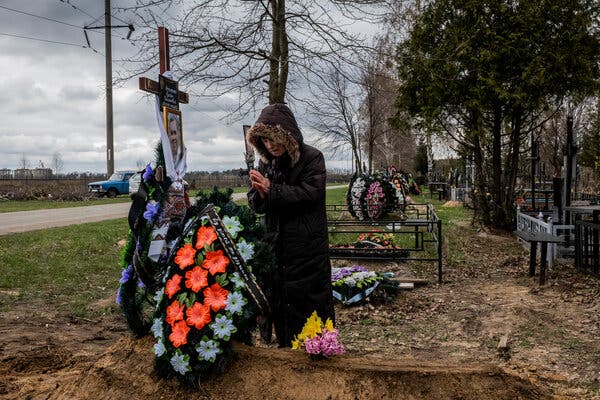 Valentyna Nechyporenko, 77, mourning at the grave of her son, Ruslan, during his funeral in Bucha, Ukraine, last month. He was killed by Russian forces in March.Credit...Daniel Berehulak for The New York Times

“The figures will continue to increase,” Ms. Bachelet told a special session of the United Nations Human Rights Council in Geneva, the second in two weeks, focusing on abuses uncovered by investigators in Bucha, Irpin and other suburbs of Kyiv that were seized by Russia’s forces in the invasion’s early stages. Russia has denied committing any atrocities in Ukraine.

The announcement by Finland’s leaders to apply for membership in NATO had been widely expected. Public opinion in Finland has shifted significantly in favor of joining the alliance, from 20 percent six months ago to nearly 80 percent now, especially if Sweden, Finland’s strategic partner and also militarily nonaligned, joins as well.

“Finland must apply for NATO membership without delay,” the Finnish leaders said in a statement. “We hope that the national steps still needed to make this decision will be taken rapidly within the next few days.”

A parliamentary debate and vote were expected on Monday.

The debate in Sweden is less advanced than in Finland, but Sweden, too, is moving toward applying to join NATO, perhaps as early as next week.

Mr. Putin has cited NATO’s spread eastward into Russia’s sphere of influence, including to former Soviet states on its borders, as a national threat. He has used Ukraine’s desire to join the alliance to help justify his invasion of that country, though Western officials have repeatedly said that the possibility of Ukrainian membership remains remote.

One reason is that NATO would be highly unlikely to offer membership to a country entangled in a war. 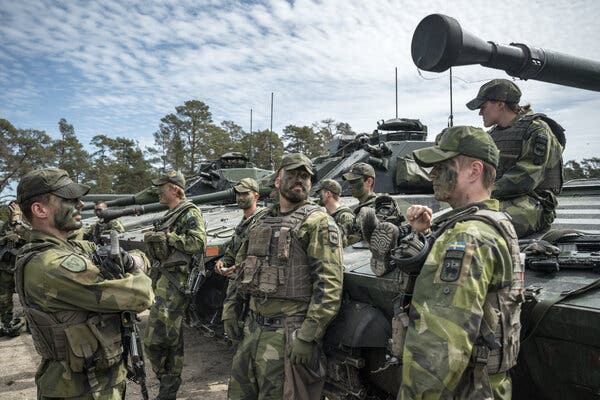 Swedish soldiers during a training exercise on Gotland Island, Sweden, on Wednesday.Credit...Sergey Ponomarev for The New York Times

If Ukraine were to become a NATO member, the alliance would be obligated to defend it against Russia and other adversaries, in keeping with the application of NATO’s Article 5 that an attack on one member is an attack on the entire alliance.

Finland’s NATO membership bid. Finland’s leaders announced their support for the nation to join the alliance, while Sweden is expected to do the same within days. The Kremlin said that Finland’s possible accession was a threat and that Russia would “take necessary measures” to protect itself.

On the ground. Ukrainian and Western officials said Russia is reportedly withdrawing forces from around Kharkiv, Ukraine’s second-largest city, where it has been losing territory. The officials said Moscow may redirect troops to the southeast, where Russian troops are making greater progress.

Civilian killings. The United Nations human rights chief said that the bodies of more than 1,000 civilians, including several hundred who were summarily executed, have been recovered in areas near Kyiv that were occupied by Russian forces in the early stages of the invasion.

American aid. The House voted 368 to 57 in favor of a $39.8 billion aid package for Ukraine, which would bring the total U.S. financial commitment to roughly $53 billion over two months. The Senate still needs to vote on the proposal.

Even without the geopolitical risks, Ukraine, a former Soviet republic that has struggled with endemic corruption since gaining independence, would find it difficult to meet several necessary requirements to join NATO, including the need to demonstrate a commitment to the rule of law.

Sweden and Finland, in contrast, have developed over decades into vibrant and healthy liberal democracies.

Still, NATO members would have to act if Finland and Sweden were attacked by Russia or others, raising the risks of a direct confrontation between nuclear powers.

Mr. Putin was likely to try to rally support for the Ukraine invasion by portraying the moves by Finland and Sweden as fresh evidence that NATO is growing increasingly hostile.

If Finland and Sweden apply, they are widely expected to be approved, although NATO officials are publicly discreet, saying only that the alliance has an open-door policy and any country that wishes to join can request an invitation. Still, even a speedy application process could take a year, raising concerns that the two countries would be vulnerable to Russia while outside the alliance.

Besides a long border, Finland shares a complicated, violent history with Russia. The Finns fended off a Soviet invasion in 1939-40 in what is known as “The Winter War.” 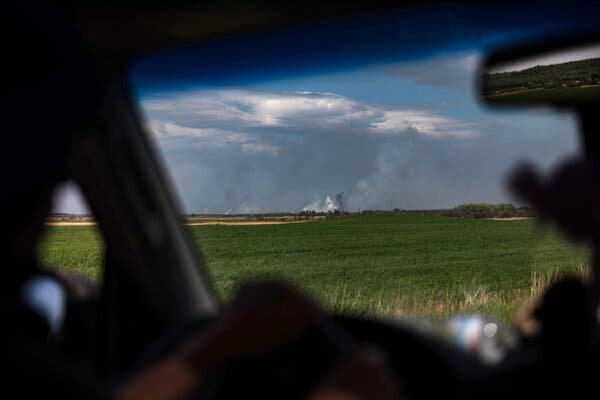 Smoke rising over the village of Velyka Komyshuvakha, Ukraine, on the front lines of fighting with Russian forces in the Kharkiv region on Thursday.Credit...Lynsey Addario for The New York Times

The Finns eventually lost, gave up some territory and agreed to remain formally neutral throughout the Cold War, but their ability to temporarily hold off the Soviet Union became a central point of Finnish pride.

After the collapse of the Soviet Union, Finland moved to join the European Union in 1992, becoming a member in 1995, while remaining militarily nonaligned and keeping working relations with Moscow.

Finland has maintained its military spending and sizable armed forces. Finland joined NATO’s Partnership for Peace program along with Sweden in 1994 and has become ever closer to the alliance without joining it.

Steven Erlanger reported from Brussels, and Norimitsu Onishi from Paris. Reporting was contributed by Cora Engelbrecht from London, Nick Cumming-Bruce from Geneva, Ivan Nechepurenko from Tbilisi, Georgia, Monika Pronczuk from Brussels and Dan Bilefsky from Montreal.

Russia’s War in Ukraine
Life in a Ukrainian Unit: Diving for Cover, Waiting for Western Weapons
May 12, 2022
In the Trenches of Eastern Ukraine, Combat Becomes a Vicious Dance
May 11, 2022
The Ukraine War’s Economic Toll Is Testing the West’s Unity Against Russia
May 11, 2022

Steven Erlanger is the chief diplomatic correspondent in Europe, based in Brussels. He previously reported from London, Paris, Jerusalem, Berlin, Prague, Moscow and Bangkok. @StevenErlanger

Norimitsu Onishi is a foreign correspondent on the International Desk, covering France out of the Paris bureau. He previously served as bureau chief for The Times in Johannesburg, Jakarta, Tokyo and Abidjan, Ivory Coast.