In These New Textbooks, Hong Kong Was Never a British Colony

The books are part of China’s effort to instill a particular historical narrative and to stress patriotic education in a city where a pro-democracy movement was crushed. 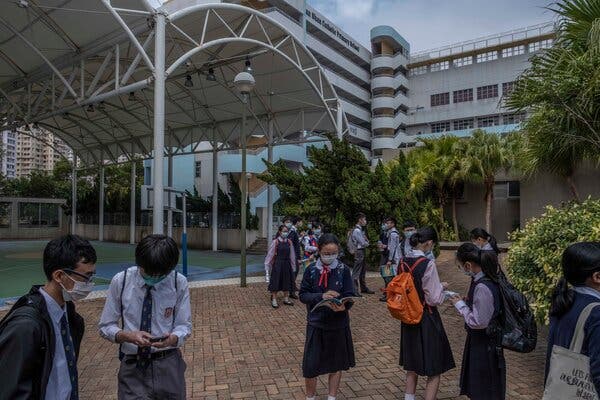 Students at Wong Tai Sin, in Hong Kong, last year. Bejing has launched a sweeping overhaul of the education system in the territory.Credit...Lam Yik Fei for The New York Times

HONG KONG — Many schoolchildren around the world have long been taught that Hong Kong was once a colony of the British Empire. But students in Hong Kong will soon learn a different lesson: It wasn’t.

Beijing has steadfastly maintained that historical view of the city’s status, long before Britain returned the territory to China in 1997, and years before a sweeping crackdown crushed a thriving pro-democracy movement in the once-semiautonomous territory.

Now, as Hong Kong prepares to commemorate 25 years since its handover to China on July 1, 1997, that narrative — which rejects how the British saw their relationship to the city — will be explicitly taught to Hong Kong high school students through at least four new textbooks that will be rolled out in the fall.

Jeffrey Ngo, a Hong Kong pro-democracy activist and a doctoral candidate in history at Georgetown University, said that the government’s position “is a shorthand for saying, ‘Hong Kong was always a part of China, thus Hong Kongers never could claim a right of self-determination.’”

“It’s about trying to make sure the next generation of young kids are going to be supportive or at least sympathetic to what the government is saying,” Mr. Ngo added. “This is part of the remake of Hong Kong in the national security era.”

Under the terms of the 1997 handover negotiated with Britain, China had agreed that the social and economic systems of the territory would remain unchanged for 50 years after resuming sovereignty, with the result that Hong Kong initially had a high degree of autonomy from the mainland. When moves by Beijing threatened that arrangement, protesters took to the streets in 2014 and again in 2019.

In the wake of the 2019 pro-democracy protests against the tightening grip of China’s Communist Party on the city, Beijing sought to punish dissent, limit free speech and target independent news outlets and pro-democracy leaders. It prosecuted thousands of activists, and some fled into exile. A national security law imposed on Hong Kong also gave the authorities sweeping power to silence opposition. Officials also targeted Hong Kong’s educational system, which, they said, had shaped the beliefs of youths who led the demonstrations.

Steve Tsang, the director of the SOAS China Institute in London, said that since the Chinese leadership issued in 2013 a memo known as Document No. 9 that took aim at Western influences in the country, China has allowed only one version of history to be taught. Hong Kong would no longer be an exception to the rule.

“In the Xi approach to history, facts are merely incidental,” Professor Tsang said. “Only interpretation matters. And only one interpretation is allowed.”

Scholars and historians said that China’s portrayal of Hong Kong’s status under British rule is not new. Although the Communist Party had referred to China before 1949 as a “half colony, half-feudal society,” it has maintained since at least 1997 that Hong Kong was not a true colony, said Ho-fung Hung, a professor of political economy at Johns Hopkins University and the author of “City on the Edge: Hong Kong Under Chinese Rule.”

He cited an article in the party’s newspaper, People’s Daily, published in March 1997, that argued: “The United Kingdom has exercised typical colonial rule in Hong Kong, but it does not mean that Hong Kong is a colony. Colonies in the usual sense mainly refer to countries that have lost their sovereignty due to foreign rule and jurisdiction. Hong Kong is part of China’s territory, so the concept of colony does not apply to Hong Kong.”

In the 19th century, Britain took over what is now modern-day Hong Kong via two wars and a series of treaties that the Chinese government called unequal and coerced.

In 1946, the United Nations included Hong Kong on a list of “non-self-governing territories,” and in a 1960 resolution said the people there should be granted “the right to self-determination.” In 1972, after Beijing took over China’s seat in the world body, it successfully pushed the U.N. to remove Hong Kong from the list, arguing that it was within China’s sovereign right to decide Hong Kong’s future.

He added, “Beijing only admits that Britain had imposed ‘colonial rule’ on Hong Kong. Textbooks, of course, have to reflect Beijing’s position. ”

The Latest on China: Key Things to Know

A regional strategy. Documents obtained by The Times show that China is pursuing a regional agreement with Pacific island nations that would expand Beijing’s role in policing, maritime cooperation and cybersecurity, in an apparent attempt to win friends and gain greater access to the strategically important island chains.

Gender violence. Several women in the northern city of Tangshan were beaten after one of them rebuffed a man in a restaurant. Graphic footage of the brutal attack fueled online debate that showed both the growing awareness of feminism and how divisive the subject still remains in the country.

Discontent among the population. The Chinese government’s censorship and surveillance, which the pandemic has aggravated, are pushing a small but growing group of Chinese to look for an exit. Younger Chinese in particular are embracing the view that they might need to flee the country in the pursuit of a safer and brighter future abroad.

A new trick for internet censors. To control the country’s internet, China’s censors have relied for years on practices like on deleting posts, suspending accounts and blocking keywords. Now they have turned to displaying users’ locations on social media, fueling pitched online battles that link Chinese citizens’ locations with their national loyalty.

An uncertain harvest. Chinese officials are issuing warnings that, after heavy rainfalls last autumn, a disappointing winter wheat harvest in June could drive food prices — already high because of the war in Ukraine and bad weather in Asia and the United States — further up, compounding hunger in the world’s poorest countries.


Mr. Lau, who is named as an editorial adviser to one of the textbooks, declined to comment further on the books themselves, saying that he had played only a limited role.

The new schoolbooks appear to be the linchpin of a revamped civics high school course that in years past had been known as liberal studies. It used to emphasize critical thinking and taught students to be objective and analytical. The older curriculum, which was developed in 2007 and periodically updated, did not appear to address the circumstances that led to Hong Kong’s handover. Some teachers discussed democracy, civil rights and even the Tiananmen Square massacre as part of their lesson plans.

The new course, which was renamed Citizenship and Social Development last year, lists “Hong Kong’s return to China” as part of the first lesson plan. It places greater emphasis on patriotism, China’s “indisputable sovereignty and jurisdiction” and the national security law.

Excerpts from the textbooks seen by The Times repeatedly reinforce the party’s position on Hong Kong. “The British aggression violated the principles of international law so its occupation of Hong Kong region should not have been recognized as lawful,” read the teachers’ edition proof copy of one textbook published by the Hong Kong Educational Publishing Company.

“Hong Kong did not have colonial status, and thus there was no so-called self determination,” it continued.

The Hong Kong Educational Publishing Company, which published two of the four textbooks, did not respond to requests for comment. Neither did two other publishers of textbooks that denied Hong Kong’s colonial status: Aristo Educational Press and Modern Educational Research Society.

Hong Kong’s Education Bureau, which oversees the review of new textbooks, said in a statement last week that the proofing process was confidential and that the department would “follow up” with those who had violated its terms.

It did not identify anyone and did not answer questions on the contents of the books.

Tiffany May covers news from Asia for The New York Times. She joined The Times in 2017. @nytmay