Every day these women have been in prison has been an injustice. The women of Pussy Riot should never have been charged with a hate crime.

(Moscow) – Russian authorities should immediately and unconditionally free the two members of the feminist punk group Pussy Riot who remain behind bars.

The two women, Nadia Tolokonnikova and Maria Alyokhina, have been in detention since their arrest nearly one year ago, on March 2, 2012. They were sentenced in August to two years in prison for “hate-motivated hooliganism” based on a political stunt in the area near the altar of Moscow’s Christ the Savior Cathedral.

“Every day these women have been in prison has been an injustice,” said Rachel Denber, deputy Europe and Central Asia director at Human Rights Watch. “The women of Pussy Riot should never have been charged with a hate crime.” 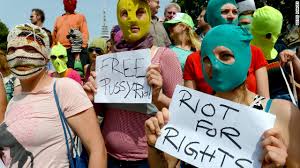 A Moscow court found Tolokonnikova, Alyokhina, and Ekaterina Samutsevich, guilty on charges of hooliganism committed by a group of persons motivated by religious hatred, under article 213, part 2 of Russia’s criminal code. In October, the Moscow City Court released Samutsevich on parole because she was not among the band members who actually entered the area in front of the altar.

Four members of the group performed the 40-second political stunt, which they call a “punk prayer,” on February 21, 2012, in Moscow’s Russian Orthodox cathedral. Wearing brightly colored dresses and balaclavas, they sneaked into the area in front of the iconostasis – a screen that separates the sanctuary from the rest of the church – where the public is generally not supposed to enter.

They danced, jumped, and shouted some words to their song, “Virgin Mary, Get Putin Out.” They were forcibly removed from the premises and caused no damage to church property. 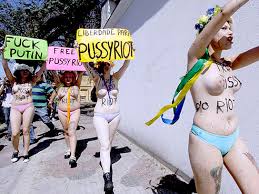 The judge concluded that that the women’s actions were motivated by religious hatred and had caused grievous harm to Christian Orthodox believers. Tolokonnikova, Alyokhina, andSamutsevich have said their actions in the cathedral aimed at criticizing the close ties between the Russian Orthodox Church and the Kremlin, as well as the way in which the two institutions reinforce each other’s conservative approaches on such issues as gender equality and rights for gay people. The group was particularly critical of Russian Patriarch Kirill’s open support for Putin during the presidential election campaign.

In her ruling, the judge said the women “made no political statements and did not mention the name of a single politician.”

Although Human Rights Watch recognizes that abusive conduct may not be insulated from punishment simply because it may be accompanied by protected expression, the Russian authorities had other options for holding the band members accountable for their actions, including through articles of Russia’s code of administrative offenses. 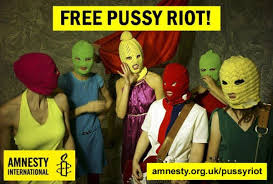 The case against Pussy Riot was politically motivated, Human Rights Watch said. The judge argued in the verdict that Pussy Riot’s assertion of feminist ideology insulted Orthodox values and was therefore a hate crime. But since the stunt’s aim was to speak out about Kremlin policies, it was clearly political speech that is protected under Russian and international law, Human Rights Watch said.

“The imprisonment of Pussy Riot members is just one example among many others of the unmistakable crackdown on criticism of government and political dissent in Russia today,” Denber said. “Other examples are the restrictive laws, smear campaigns, and harassment of civil society activists during the past year.”