Rajoy is cutting it fine with his Catalonian intervention (Financial Times) 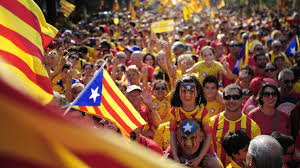 The cliché “better late than never” was not coined for politics, where timing can be everything. So when the leaders of Spain’s two post-Franco parties of central government — the centre-right Popular party (PP), currently in power, and the opposition Socialists (PSOE) — propose alternatives to the secession of Catalonia 10 weeks before the separatist Catalan autonomous government holds a referendum on independence, there are questions about timing and substance. Mariano Rajoy, prime minister and leader of a minority PP government, said in Bilbao recently that the path forward for Catalans is the Basque way. Unlike the Catalans, the Basques collect their own taxes. “What the government of Spain and the Basque government are doing today is what should be done,” Mr Rajoy declared. Fiscal autonomy on Basque lines was, in fact, what the government in Barcelona sought from Madrid in September 2012. Mr Rajoy refused even to discuss it. Millions poured on to the streets of Catalonia and separatism went mainstream. Meanwhile Pedro Sánchez, the Socialist leader, called for a recasting of the Spanish constitution along deeper federal lines, in order to accommodate historic nations such as the Catalans and Basques. “The Spain [which is] a nation of nations is coming, because centralism is the past,” he said. His statement was part of an attempt to refloat the Catalan sister party of the PSOE, which has been caught in the crossfire between separatism and unionism, and reduced to electoral hardship (history shows that the Socialists need to carry Catalonia to win in Spain). While this all sounds statesmanlike, waiting almost until the eve of a constitutional train-crash that could wreck Spain is not. Yet these ideas — more federalism and more fiscal autonomy under a reformed constitution — are almost certainly the only way out of a mess for which Mr Rajoy and his party bear heavy responsibility. It used to be the Basque question, inflamed by separatist violence, that bedevilled the post-Franco formula of democracy and devolution. That started changing in 2010, when the Constitutional Court, at the urging of the PP, eviscerated the reformed Catalan statute of autonomy, in what always looked more a political than a legal decision. The reformed charter had been approved by the parliaments in Madrid and Barcelona, and Catalans endorsed it in a referendum. Constitutional lawyers, and politicians who helped write the constitution, say if the court thought it was unconstitutional, legally it should have said so before these democratic votes. Both major parties have at times needed support from Catalan and Basque nationalists to ensure a majority in Spain’s parliament, and have traded more devolved power in exchange. But the PP has also at times found it electorally rewarding in the rest of Spain to incite antagonism against the Basque Country and Catalonia, where its centralising instincts severely limit its support. Right now, the mainstream Basque nationalist party, the PNV, and the PP are, if not on the same page, at least on the same trading floor. The PP needs the PNV’s five MPs in Madrid to get measures such as the budget through. The cost is high: a further reduction in the revenue that Basques remit to Madrid (roughly a tenth of the amount Catalonia sends); a big fiscal rebate; and a €3.4bn high-speed train package to join up all spurs inside Basque territory. Mainstream Catalan nationalists — who for the past five years have played sorcerers’ apprentice to separatism — look cack-handed as well as empty-handed in light of this Basque bonanza. For decades, moreover, they have failed to persuade Madrid to develop the “Mediterranean corridor” down Spain’s east coast, even though the EU has identified this trade and infrastructure axis as a priority. Madrid is emptying for the summer, but the Constitutional Court will be sitting next month, honing its legal weapons against the Catalan plebiscite. Secessionists have never polled more than 47 per cent, but every injunction helps their cause. The test of the new openness demonstrated by Messrs Rajoy and Sanchez will be if Madrid drops the alibi that Spain is trapped in a legal labyrinth, in which the constitution is a tablet of stone, and judges are shields against a political problem elected politicians have a duty to resolve. Mr Sanchez put it well in Barcelona: “If it were simply enough to obey the law, we would be governed by judges.” david.gardner@ft.com

Please use the sharing tools found via the email icon at the top of articles. Copying articles to share with others is a breach of FT.com T&Cs and Copyright Policy. Email licensing@ft.com to buy additional rights. Subscribers may share up to 10 or 20 articles per month using the gift article service. More information can be found here.
https://www.ft.com/content/68632594-6bb7-11e7-bfeb-33fe0c5b7eaa?mhq5j=e3