"Europe must act to protect the rights and freedoms of Catalans", Ada Colau

The Catalan question has become Europe’s most serious territorial crisis in recent years. While the aim of exercising self-government has a long history, the origins of the current crisis can be found in the repeated refusals on the part of the government in Madrid to enter a dialogue on Spanish territorial reforms that recognises the right of Catalans to decide their own political future.

You do not need to share the Catalan regional government’s roadmap to realise that the main party responsible for worsening the situation has been the intransigent government of Spain’s prime minister, Mariano Rajoy.

That government has been committed to imposing a judicial solution on to a political problem since 2014, when the government in Barcelona launched a non-binding consultation to gauge the Catalan population’s opinions on independence. We have been witnessing a judicialisation of politics ever since, a process that first started when Catalonia’s former president, vice-president and minister of education were fined and disqualified from politics.

This process, however, took a “qualitative leap” last week, putting fundamental rights and freedoms at risk, with the threatened arrest of 700 mayors, the closing of government websites and civil society organisations, the arrest of high-level regional government officials, the interrogation and intimidation of school directors, interference in the regional government’s accounts and a massive deployment of police forces for the purpose of preventing Catalonia’s citizens from being able to vote this Sunday at the referendum convened by their regional government.

We are not just facing an institutional dispute but also a social and political conflict that clearly has to be resolved by political means.

There are many non-separatists such as ourselves, who, while critical of the unilateral path taken by the Catalan regional government, are calling for a negotiated solution in accordance with the feelings of 82% of the Catalan population, who support the holding of an agreed referendum, like the one conducted in Scotland. That is why it is a mistake to think the Catalan question can be resolved by taking legal action against its political representatives: following that path will only help to raise social tensions and block any possibility of finding a way out of the conflict.

By proving itself incapable of finding a solution during all this time, the Spanish government has allowed the Catalan conflict to escalate from an internal dispute to a European conflict. Europe today consists of interconnected states, societies, businesses and citizens cooperating with one another. At a time when the European project finds itself threatened by terrorism and an upsurge in xenophobic populism and isolationist policies in national states, Europe cannot allow itself to adopt an passive position over the Catalan question, seeing that the events going on in Barcelona are affecting Paris, Madrid, Brussels and Berlin alike.

The European Union came about as a project to safeguard and guarantee our rights and freedoms. Defending the fundamental rights of Catalan citizens against a wave of repression from the Spanish state is also the same as defending the rights of Spanish and European citizens. 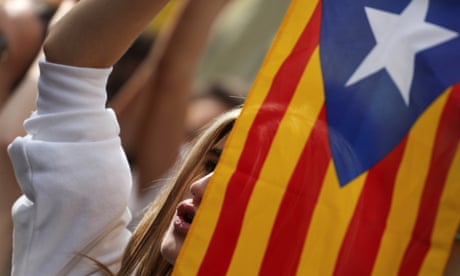 Why do some Catalans want independence and what is Spain's view?

Those of us who are committed to advancing towards a democratic, social and freedom-loving European project find it hard to believe that the European Union’s institutions would not only back a situation that jeopardises fundamental rights and freedoms but also fail to commit themselves to finding the means for a negotiated solution to the conflict.

It is for this reason, given the seriousness of the situation in Catalonia, that it is my obligation as mayor of its capital, Barcelona, to call on the European commission to open a space for mediation between the Spanish and Catalan governments to find a negotiated and democratic solution to the conflict.

Barcelona is a city of peace, a lover of dialogue and has a strong cosmopolitan and pro-European vocation –which is why the majority of its population wishes to vote. It does not want a collision with unforeseen consequences. I am convinced most of our European partners do not want that either.