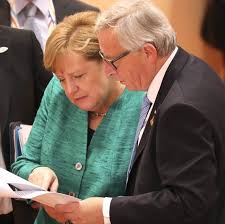 BRUSSELS (Reuters) - German Chancellor Angela Merkel and the European Commission President Jean-Claude Juncker have discussed the Catalan crisis in a phone call, an EU official told Reuters on Saturday, in a sign of growing unease over potential disruption across Europe.

The call signals fresh concern over a possible declaration of independence next week by the Catalan regional parliament and the reaction of the Spanish government, which could exacerbate what is already Spain’s worst political crisis for decades.

Juncker spoke to Merkel from India on Friday on the sidelines of an EU-India summit. “They discussed the situation in Spain, among other things,” the EU official said, without adding details.

Concern is growing in EU capitals about the negative impact of the crisis on the Spanish economy, the fourth largest in the euro zone, and on possible spillovers to other economies of the bloc.

European finance ministers, gathering in Brussels on Monday and Tuesday for a regular meeting, could discuss the issue, although it is not formally on the agenda, EU officials said.

The EU Commission has repeatedly urged Catalan and Spanish leaders to find a political solution.

The support given in public statements by EU leaders to Spain’s Prime Minister Mariano Rajoy is combined with concern expressed in private about how the Spanish government’s use of police to prevent Catalans from voting last week in an independence referendum could backfire.

The Spanish government apologized for the first time on Friday for the police use of violence..

Some EU states are worried that talk of Catalan independence could fuel secessionist feelings in other parts of Europe.

Reporting by Peter Maushagen in Brussels and Andreas Rinke in Berlin; Writing by Francesco Guarascio; Editing by Andrew Bolton