"Why Are So Many Democracies Breaking Down?", Michael Albertus & Victor Menaldo 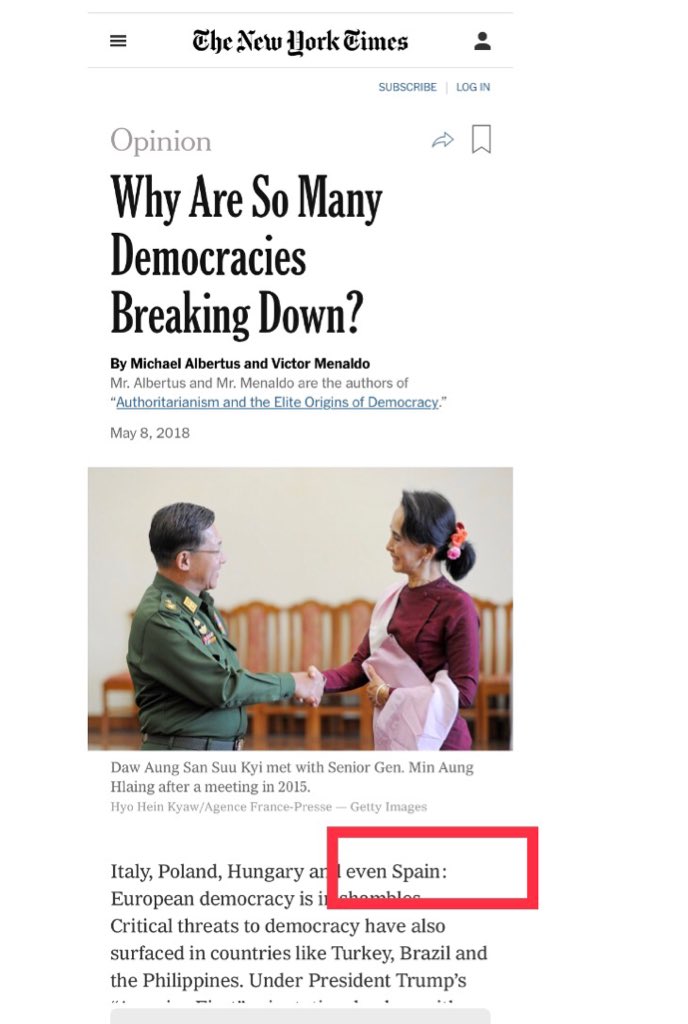 Mr. Albertus and Mr. Menaldo are the authors of “Authoritarianism and the Elite Origins of Democracy.”

Italy, Poland, Hungary and even Spain: European democracy is in shambles. Critical threats to democracy have also surfaced in countries like Turkey, Brazil and the Philippines. Under President Trump’s “America First” orientation, leaders with authoritarian tendencies in places as disparate as Egypt, Honduras, Russia and Venezuela have trampled their political opponents without concern for anything more harmful than a tongue lashing from the United States.

Why do democracies backslide toward authoritarianism? Many scholars point to the worrisome erosion of democratic norms rooted in a social consensus about the rules of the game and civility toward fellow citizens.

But this erosion of democratic norms is ultimately driven by deeper factors. In many democracies, the roots of breakdown reside in democratic constitutions themselves.

Over two-thirds of countries that have transitioned to democracy since World War II have done so under constitutions written by the outgoing authoritarian regime. Prominent examples include Argentina, Chile, Kenya, Mexico, Nigeria, South Africa and South Korea. Even some of the world’s early democracies, such as the Netherlands and Sweden, were marred by deep authoritarian legacies. Democratic institutions are frequently designed by the outgoing authoritarian regime to safeguard incumbent elites from the rule of law and give them a leg up in politics and economic competition after democratization.

The constitutional tools that outgoing authoritarian elites use to accomplish these ends include factors like electoral system design, legislative appointments, federalism, legal immunities, the role of the military in politics and constitutional tribunal design. In short, with the allocation of power and privilege, and the lived experiences of citizens, democracy often does not restart the political game after displacing authoritarianism.

You have 2 free articles remaining.

Myanmar is a prime example of how outgoing authoritarian regimes can game democracy in their favor. The 2015 elections that brought Daw Aung San Suu Kyi and the National League for Democracy to power were conducted within the framework of the 2008 constitution that the military wrote. Before handing over power, the military-dominated legislature passed a flurry of legislation that included promises of amnesty to military generals who have been accused of human rights abuses, a generous pension plan for departing lawmakers, lucrative business contracts slated to benefit outgoing generals and other elites and the transfer of manufacturing plants from the ministry of industry to the ministry of defense. And, critically, the constitution awards the military 25 percent of seats in parliament — precisely the figure needed to block constitutional reform. Its position remains so powerful that many observers wonder whether Ms. Aung San Suu Kyi and the N.L.D., despite winning the 2015 elections in a landslide, are now held hostage by the military’s brutal purging of Myanmar’s Rohingya population.

A critical consequence of the trend that new democracies tend to have their social contracts written by outgoing dictators is that while these democracies may be formed of the people, they do not function by or for the people. Citizens may be free from some of the worst abuses of authoritarianism, such as blanket censorship and outright repression, but they are not important players in determining public policy. In this way, democracy is a sort of purgatory in which they wander — sometimes for decades — with little capacity to determine its direction.

This is a recipe for discontent with democracy. Major crises like a severe economic recession can provide the tinder for citizen disaffection to crystallize into rage and inciting voters to throw out traditional political parties en masse. This discontent can ultimately lead to democratic demise, as inexperienced new political actors appeal to demagogy and dismantle longstanding institutions without building a more solidly democratic foundation.

Consider Turkey, where President Recep Tayyip Erdogan has used bluster and constitutional reform to gut the checks and balances and military vetoes that previously hemmed in civilian politicians. The 1982 authoritarian constitution that guided Turkey’s 1983 transition to democracy created a constitutional court with the ability to ban political parties like Communists and overtly religious parties. The military maintained autonomy over its budget and decision-making. Perhaps most egregiously, the top military brass and their collaborators made sure there was a series of clauses and articles that granted them immunity from prosecution for any crimes during the authoritarian era. A result was that the military and their allies continued to enjoy economic privileges, like retaining ownership of key industries, while avoiding prosecution for human rights abuses.

In 1987, however, a major amendment to Turkey’s 1983 constitution lifted a ban on some outlawed opposition parties. This paved the way for the later rise of new parties like the Justice and Development Party, which, since the early 2000s, in the wake of a major economic crisis, has dominated Turkish politics. Indeed, under the J.D.P. banner, Mr. Erdogan was able to exploit the military’s reputation for impunity, as well as dissatisfaction by clerics and conservative citizens in the Anatolian heartland with the ironclad separation of church and state imposed by the constitution and enforced by the military.

His populist economic policies have been wedded to a protracted campaign to consolidate the power of the executive branch, weaken the military (including jailing officers), empower Islamists, enervate individual liberties and the judiciary, and ultimately replace Turkey’s holdover constitution with his own. He achieved that much in 2017 after a popular referendum approved 18 amendments to the constitution, which transformed Turkey into a presidential system in which the executive exercises outsize power, including the ability to appoint the majority of judges and prosecutors.

Democratic erosion has followed a similar pattern in other countries as well. Hungary’s ever more authoritarian prime minister, Victor Orban, leveraged popular discontent with the country’s Communist-written constitution to renovate Hungarian political institutions with a new constitution in 2011. Mr. Orban’s reforms have hobbled the judiciary and cleared the way for his political party, Fidesz, to trample its opponents.

Fortunately, elite-biased democracies can successfully reform their social contracts over time to become more egalitarian and representative of average citizens rather than sliding back into dictatorship. It is not easy or common.

But if it is to be done, it tends to occur in the wake of these very same major crises or economic shocks. Mass citizen mobilization, when married to the material support of a faction of disaffected or disadvantaged elites, can succeed in amending or entirely rewriting democratic constitutions to eliminate the worst distortions to representation.

But this requires patience, magnanimous leadership and citizen faith in the promise of what democracy can deliver — all of which seem to be running increasingly short.