"A manifesto for renewing liberalism", The Economist (II/II) 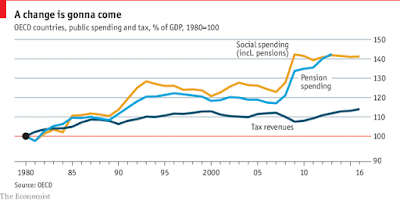 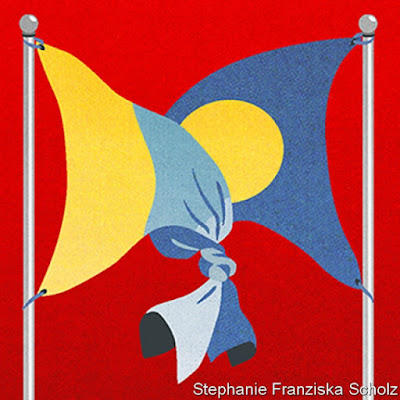 Military capabilities are crucial. Only with them firmly in hand can the most be made of the world’s many mechanisms for peace. In the cold war, the West and the Soviet Union had few economic links. The big economies of the 21st century are highly integrated. The gains to be reaped from working together to repair, reform and sustain the rules-based trade and economic system are huge.
In this spirit China’s ambitions to make the yuan an international currency should, in general, be welcomed—they will only serve to hasten its economic liberalisation. The new Asian infrastructure bank it supports is likely to prove a useful addition to international finance. Some of the “One Belt One Road” infrastructure with which it is forging links to the rest of Eurasia will be useful—though the West needs to keep an eye out for cryptic militarisation. A strong West can welcome China’s more forthright voice and increased influence, while limiting the threats that it poses.
The strength which serves that end cannot be purely military, or indeed purely economic. It must be a strength of values, too. At the moment, the West is in disarray on this front. Mr Trump has no values worth the name. European politicians are hard put to maintain liberal values at home, let alone stand up for them abroad. Nor do the leaders of India, South Africa, Brazil and the other big democracies of the developing world go out of their way to support abroad the values they espouse at home.
A decade ago the late John McCain proposed the idea of a “league of democracies”. Such a league’s members might champion liberal, democratic values and at the same time hold each other to account in such matters. It is an idea worth revisiting as a credible and useful alternative forum to the UN. The more clearly the people of liberal democracies can show that their countries work well, and work well together, the more secure they will feel, the more secure they will be and the more others will wish to join them. The world needs a vision of international relations which shores up, promulgates and defends liberal ideals. If liberal nations look only inward and give up either the power or the will to act, they will lose the moment, and perhaps their future.
VI
A call to arms
OVER the past couple of years there has been a boom in gloomy books with titles such as “The Retreat of Western Liberalism” or “Has the West Lost It?”. Magazine articles routinely ask “Is Democracy Dying?” (Foreign Affairs and more recently the Atlantic) or “What’s killing liberalism?” (the Atlantic again). The cock-of-the-walk confidence with which liberals strode into the 21st century has given way to trembling self-doubt.
Good. A complacent liberal is a failing liberal. The crucial liberal reinventions at the turn of the 20th century, during the Depression, and in the stagnation and inflation of the 1970s were all accompanied by books in which liberals (and sometimes a few others) declared the creed to be in crisis, betrayed or dead. Such restless self-doubt spurred the adaptability that has proved liberalism’s greatest strength. 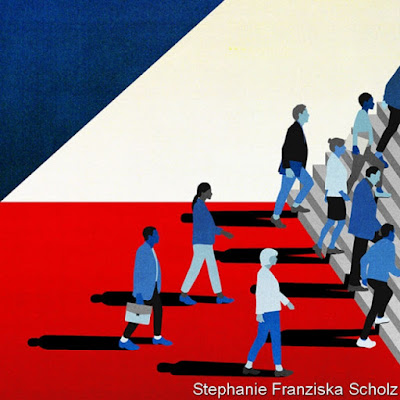 This essay has argued that liberalism needs an equally ambitious reinvention today. The social contract and geopolitical norms that underpin liberal democracies and the world order that sustains them were not built for this century. Geography and technology have produced new concentrations of economic power to tackle. The developed and the developing world alike need fresh ideas for the design of better welfare states and tax systems. The rights of people to move from one country to another need to be redefined. American apathy and China’s rise require a rethinking of the world order—not least because the huge gains that free trade has provided must be preserved.
The need for new thinking does not mean ignoring the lessons of history. The 21st century brings some challenges not seen before, most obviously and most worryingly climate change, but also the prospects of intrusive new technologies of the mind. But inequality of opportunity and the discontent it drives are not new. Nor is the unhealthy concentration of wealth and power. That is why it is worth dusting off 19th-century ideas, from vigorous competition policy to the taxation of land and inheritance.
Whether it was the Anti-Corn Law League, America’s Progressive movement, the architects of the Bretton Woods system or the free-marketeers who urged the taming of inflation and the rolling back of the state in the 1970s, liberal reformers at their best have shared a dissatisfaction with the status quo and a determination to attack established interests. That sense of urgency and boldness is missing now. Liberal reformers have become liberal insiders, satisfied beneficiaries of the world they have helped to build. Their setbacks provoke despondency and panic more than determination. They lack a motivator on a par with the fear (of socialism, fascism or communism) or the trauma of failure (the Depression, the world wars) that drove past reinventions. The threats of nationalism and authoritarianism, though grave and pressing, seem less acute. The success with which policymakers prevented the 2008 financial crisis from spiralling into a global depression added to the complacency and dulled the hunger for more radical reform—even though the mishandling of the crisis in Europe led to many of that continent’s current political problems.
Liberals need to shake themselves out of this torpor. And they need to persuade others of their ideas. All too often, in recent years, liberal reforms have been imposed by judges, by central banks and by unaccountable supranational organisations. Perhaps the best-founded part of today’s reaction against liberalism is the outrage people feel when its nostrums are imposed on them with condescending promises that they will be the better for it.
Liberals also need to look at the degree to which self-interest blunts their reforming zeal. The people who produce and promulgate liberal policy are pretty well enmeshed with the increasingly concentrated corporate elite. Its well-heeled baby-boomer bloc is happy to get pensions that economic logic says it should forgo. If there is a greater liberal stronghold than the international institutions which liberals need to reform, it is the universities that they need to reappraise, given the urgent need to support lifetime learning. Liberals have gained the most when they have taken on entrenched power. Now that means attacking both their current allies and their own prerogatives.
How do you kick-start a liberal reinvention? It may be necessary to up-end traditional party structures, much as Emmanuel Macron has already done in France. It may demand a new generation of politicians who cannot be blamed for the way things are and articulate better than today’s crop how things should be. But whoever leads, they and their followers need to be willing to test their ideas against others’ as forthrightly as possible.
That means free speech—a lot of it. And speech that is well informed and in good faith, too. But as autocrats gain clout, the room for free speech is shrinking. Only 13% of the world’s people live in a country with a truly free press, according to Freedom House. In America, Donald Trump’s pathological lying and constant attacks on the media as “enemies of the people” and “fake news” are taking their toll. But the fact-free world of paranoid fantasy that right-wing media provide for his followers is a bigger problem.
So is the echo chamber afforded by social media—even when they are not being manipulated by foreign powers. By reinforcing people’s biases, they cut off the competition ideas need if they are to improve. At the same time they discredit the compromise that democracy needs. They relentlessly encourage a focus on the identity politics that increasingly consume left-liberals, particularly in America, drawing attention away from the broad canvas of economic and political reform to the fine brush strokes of comparative victimology. Online as elsewhere, identity politics have obstructed robust debate and promoted soft censorship.
The Economist thus marks its 175th anniversary with wariness, with optimism and with purpose. Wariness because not enough people have grasped the scale and urgency of the reforms needed if the values and insights that underpin our founding creed are to flourish as they should. Optimism because those values are as relevant as ever.

Purpose because nothing serves liberalism better than “a severe contest between intelligence, which presses forward, and an unworthy, timid ignorance obstructing our progress”. James Wilson’s words are reprinted on the first page of his newspaper this week and every week. We start our second 175 years with a renewed determination to live up to them.