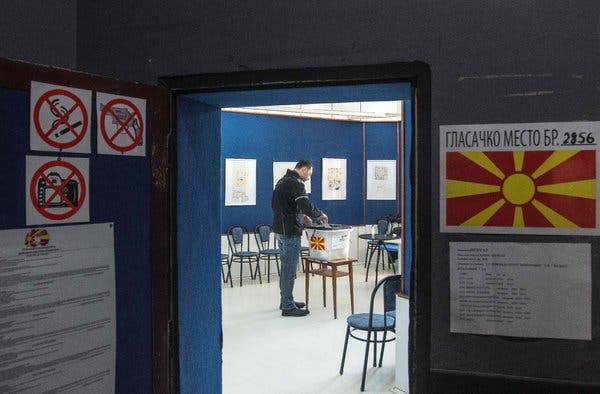 Voting on Sunday in Skopje, Macedonia, in a referendum on renaming the country in a bid to unlock its path to joining NATO and the European Union and settle a long-running dispute with Greece.CreditCreditRobert Atanasovski/Agence France-Presse — Getty Images

The results of Macedonia’s referendum on Sunday about changing the country’s name were resoundingly inconclusive — leading both sides to claim victory.

The referendum posed the question of whether to rename the country to North Macedonia in an effort by the government to end a bitter, three-decade dispute with its neighbor Greece and to join NATO.

Greece strongly opposes the country using the name Macedonia because it argues that implies territorial aspirations against a northern Greek region with the same name.

Of those who voted, 91 percent favored the name change, the state elections commission reported, with 95 percent of votes counted. 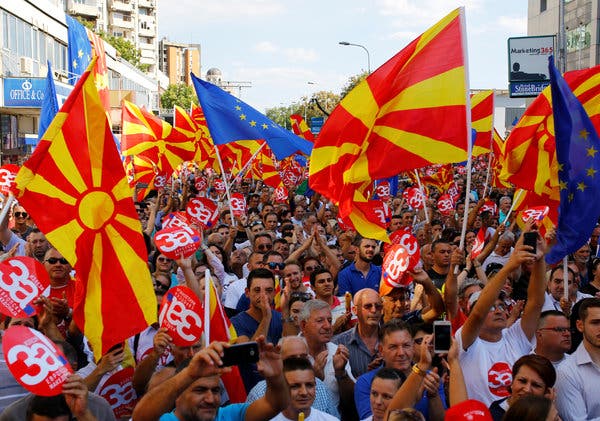 Demonstrators marching in support of a referendum on changing Macedonia’s name in Skopje in September.CreditOgnen Teofilovski/Reuters

But only 36.5 percent of eligible voters went to the polls. With that low a turnout, getting the required support from the Macedonian Parliament could be difficult.

Since so few people voted, the opposition claims the measure failed.

“Those who voted against and those who decided to boycott showed that the vast majority of the people are against this agreement, and they are the ones who sent the strongest message today,” said Hristijan Mickoski, the leader of the main conservative opposition party.

The opposition is against the name change as proposed because it argues it could have secured a better deal in negotiations with Greece.

The turnout figure was a setback for the government and for Western leaders who had pushed hard for a solid popular mandate, although the governing party is confident it can muster the parliamentary votes to approve the name change.

“The will of those who voted now must be turned into political action inside Parliament,” Prime Minister Zoran Zaev, who leads the governing Social Democrats, said on Sunday night. 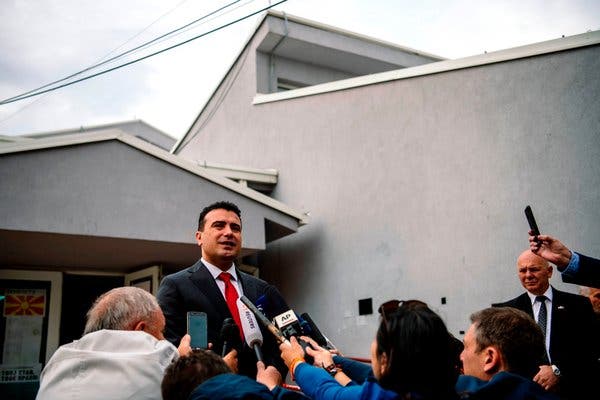 Prime Minister Zoran Zaev of Macedonia addressing the press after voting in Strumica on Sunday. Rapprochement with Greece has been a top priority for him.CreditDimitar Dilkoff/Agence France-Presse — Getty Images

To approve the name change, the Macedonian Parliament must vote on constitutional changes. Mr. Zaev said that if opposition parties did not support the constitutional changes, then he would resort to “another democratic tool” — a call for early elections as soon as November — to ensure that the changes would be made.

The deal also still requires the support of Greece’s Parliament, which must decide whether to remove its objection to its neighbor’s joining NATO.

The question of whether to change the country’s name has polarized Macedonia, and Western officials say that Russia, long opposed to NATO expansion, worked to exploit those divisions with disinformation campaigns that flooded the internet in the weeks before the vote.

In response, prominent Western figures, including the American secretary of defense, Jim Mattis, visited Macedonia to try to persuade voters to back the name change. The governing party staked all its political capital on solving the issue and joining NATO, and potentially the European Union down the line.

The European Union commissioner in charge of negotiations to expand the bloc, Johannes Hahn, wrote on Twitter that the result reflected “broad support” for both the name change and “the country’s #Euroatlantic path.”

“I now expect all political leaders to respect this decision and take it forward with utmost responsibility and unity across party lines, in the interest of the country,” he wrote.

That could still happen, but the path is now a bit harder.

The debate over the country’s name, which has its roots in the fourth century B.C. during the time of Philip II and his son Alexander the Great, has taken on a symbolic meaning far greater than the name itself.

Alexander was from a Hellenistic culture, so Greeks argue that the Slavic-speaking Macedonians have no right to claim his heritage in addition to arguing that the name change would suggest territorial aspirations.

In February, as negotiations showed signs of progress, tens of thousands Greeks marched to the Parliament in Athens, waving flags and chanting, “Macedonia is Greece.” The name, the marchers proclaimed, “is in our soul.”

But the real energy behind the protests, which occasionally turned violent, were the conservative Greek Orthodox Church and ultranationalists including the neo-Nazi Golden Dawn party. Western officials have said they believe that Russia and Kremlin-connected oligarchs also played an important role in spurring the protests. 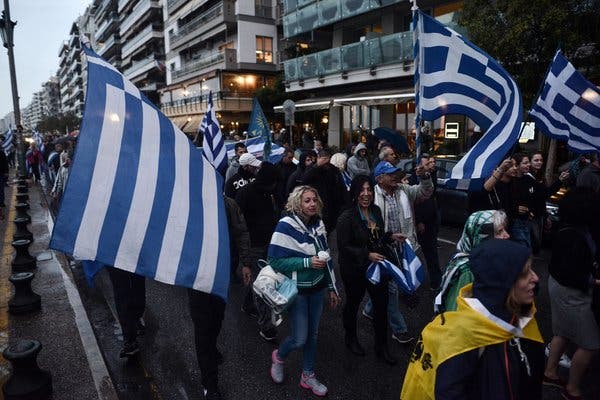 Protests in Macedonia have been smaller but no less vitriolic.

In June, after the Greek and Macedonian foreign ministers signed an agreement that outlined the details of the name deal, hundreds of Macedonians took to the streets in the capital, Skopje. The protests turned violent, with the police firing tear gas and stun grenades after reports that people were trying to breach barricades around the National Assembly building.

The dispute is perhaps best illustrated by the hundreds of statues and monuments highlighting the glories of ancient Macedonia, a product of an extraordinarily kitschy building spree in Skopje that was led by then-Prime Minister Nikola Gruevski, before he was arrested and tried on graft and wiretapping charges.

At the heart of most of those projects — and of the dispute itself — was Alexander the Great. The airport was named for him. So was the highway that led to the airport. And in the center of the city is a 92-foot-tall statue and fountain known as “Warrior on a Horse.” It is unmistakably Alexander.

The Greeks watched with increasing anger.

But the current dispute really has its roots in the wars of the 20th century. After the first Balkan wars ended in 1913, Macedonia was divided by three of the warring parties — Greece, Serbia and Bulgaria. After World War II, civil war broke out in Greece and the Slavic-speaking Macedonians were on the losing side, with many expelled from what is now Greece.

When the Republic of Yugoslavia was formed, it included a territory called “Macedonia,” and when Yugoslavia broke apart in 1991 after the Balkan War, the “Republic of Macedonia” was created. It was recognized by more than 140 nations, including the China, Russia and the United States. 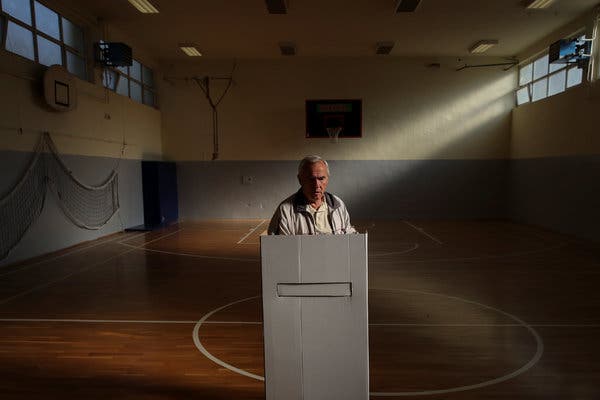 But not Greece. Athens feared that Macedonians expelled during the civil war would make claims on land, an issue that negotiators for the name deal addressed by making explicit that land claims would be unacceptable.

When Mr. Zaev became prime minister in May 2017, one of his first moves was to make rapprochement with Greece his top priority. He halted the construction projects of the previous government, and changed the name of the airport and the highway.

He said in an interview two weeks before the vote that the previous government’s “utterly misguided foreign policy” had left the country isolated.

“That was the biggest threat to our country’s future,” he said. “This had to be changed and corrected. The second reason is that the citizens and the most influential political parties have agreed that membership in E.U. and NATO are our main strategic priorities.”

And that was the way the referendum question was framed for voters on Sunday: “Are you for E.U. and NATO membership by accepting the agreement between the Republic of Macedonia and the Republic of Greece?”

A version of this article appears in print on Oct. 1, 2018, on Page A9 of the New York edition with the headline: Little Solved in Macedonia After Vote to Change Name. Order Reprints | Today’s Paper | Subscribe

Dancing Nymphs and Pirate Ships: Notes from a Capital of Kitsch 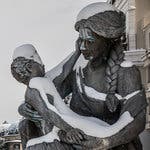 What’s in a Name? For Macedonia, the Key to Peace and Security 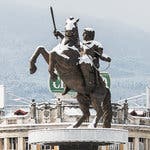