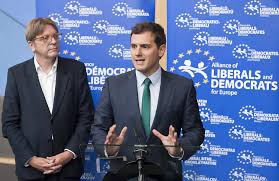 ALDE TRADE-OFF: ALDE party expelled Catalan separatists PDeCat this weekend from the liberal EU party family. PDeCat is self-exiled former Catalan leader Carles Puigdemont’s former party (he came up with a new one this weekend, from Belgium). The expulsion, which ALDE said happened over corruption allegations, was to the liking of the other Spanish member, the Ciudadanos, which one day might be helpful in extending the borders of liberalism even further and may help bring Emmanuel Macron into the fold.

Speaking of those limits of liberalism: The eponymous ALDE group in the European Parliament consists of MEPs from ALDE party members, as well as of the European Democrat Party, or EDP, and a bunch of MEPs who aren’t affiliated with any of those. So PDeCat MEP Ramon Tremosa has options if he wants to stay in the ALDE group — there aren’t any provisions that would see him kicked out just because his party is no longer an ALDE party member.