Belarus on general strike in protest against election results 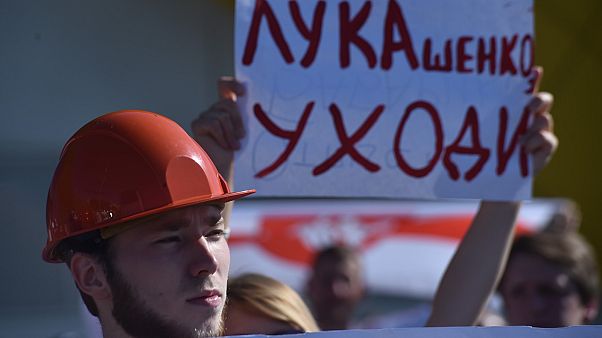 Demonstrations are underway in front of several factories and the headquarters of Belarusian public television in Minsk after the opposition had called for a general strike to protest against the re-election of President Alexander Lukashenko.

Crowds of workers from other factories were on their way to heavy vehicle manufacturer MZKT to join the protests, according to a video posted by the tut.by news site.

Belarusian opposition figure, Maria Kolesnikova, spoke out in front of the demonstrators, announcing in particular that she would go to the headquarters of public television to "support our colleagues in the resistance".

This announcement was greeted with cries of "Thank you!"

At the state-owned automobile giant, BelAz workers marched through the factory chanting in protest.

Protesters waving the white and red flags of the opposition gathered in particular in front of a heavy vehicle factory where Lukashenko arrived on Monday by helicopter to meet workers at the MZKT factory, trying to minimize the reach of the protest movement and ensuring that the factories were functioning globally despite calls for a general strike.

Strikes in the state-owned companies are seen as a real threat to his retention of power because they threaten to break the country's economic base. Over the weekend, government members and officials from the presidential administration had already tried to persuade people to return to work - without success.

Franak Viacorka, Non-Resident Fellow at the Atlantic Council told Euronews, Lukashenko "knows how to disperse protestors. [...] He knows how to scare people, but he doesn't know what to do with workers because the whole economy is dependent on the workers and Lukashenko put a lot of efforts to make and keep them loyal for many, many years."

Lukashenko's visit to the striking factory today will be an attempt to appease them, Viacorka notes. However, he says, the violent crackdown of protesters has triggered such anger, that he does not expect tensions to ease.

On Twitter, the EU Foreign Affairs Representative Josep Borrell wrote after the protests on Sunday that the European Union was on the side of the Belarusians. EU foreign ministers brought sanctions against the government in Belarus on Friday.

Thousands of workers have also stopped work at the Minsk Tractor Plant (MTZ), workers at this company told AFP.

According to Viacorka, the triple threat of protests, strikes and the "power transition" by Sviatlana Tsikhanouskaya "make this revolution plausible."

He expects Lukashenko to try and "win some time for himself," which is why "strikes need to last at least one, two or three weeks and more." Viacorka adds that the strikes will cause a domino effect, which will may well cause other companies to follow suit.

Meanwhile, there have been reports of disrupted internet service in Belarus and some say neither videos nor pictures can be shared.

Last weekend had seen one of the biggest protests in Belarusian history, as tens of thousands of people gathered in Minsk to protest the re-election of Lukashenko.

She has now fled to Lithuania, from where she has called for mass peaceful protests in all major cities of Belarus, as she accused the authorities of creating a "bloodbath".

Her husband, a former presidential candidate, was imprisoned during the election campaign.

Tens of thousands of anti-government protesters gather in Minsk