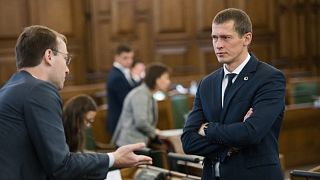 A Latvian MP has travelled to Ukraine to fight against Russian forces, the country's justice minister has confirmed.

Juris Jurašs, who is the chairman of the Latvian parliament's Legal Affairs Committee, joined a growing list of foreign fighters in Ukraine.

“He has volunteered to defend the territory of Ukraine and to fight against the invaders,” justice minister Jānis Bordāns said on Tuesday.

“He made the decision based on his private and moral principles,” he told the Baltic News Service.

Jurašs, 46, is a member of the New Conservative Party, which is chaired by Bordāns.

Ukraine has established an "international" legion for people from abroad and President Volodymyr Zelenskyy has publicly urged foreigners to fight alongside Ukrainians.

Ukraine4Freedom, a volunteer project by students at the National University of Kyiv-Mohyla Academy, also wrote on Twitter that Jurašs had joined a foreign legion unit.

The Latvian assembly (Saeima) has not commented further on the MP's decision.

Jurašs had previously attended anti-war protests in Latvia and was pictured holding a placard reading "No War".