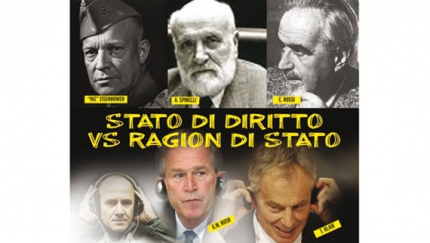 The Nonviolent Radical Party Transnational and Transparty, NGO in consultative status with UN ECOSOC invites you to the

Presentation of the proceedings of the Conference: “Rule of Law v. Reason of State”

Fifty years after the surge of “Real Communism”, the systemic use of the Reason of State has turned about 150 out of the 193 Nation States into “Real Democracies”. At the same time, the military industrial complex has developed an undisputed and tremendous technological power, which is as much structural as it is out of control; just as President Eisenhower warned when he denounced the power of the [congressional] military industrial complex as the biggest threat to the world and the United States in particular.

This double and lethal threat to Democracies – transformed almost everywhere into Real Democracies – is directed against the formal positive legal norms and thus against the Rule of Law and Human Rights, and against the “Right to Truth”, which is the objective of an initiative we wish to bring to the United Nations and which we envision as: the “Human Right to Know” what the State does in the name of Law and legality, and on behalf of the citizens in whose name it rules.

On this occasion we will present the proceedings of a Conference held on 18 and 19 February 2014 in Brussels, organized by the Nonviolent Radical Party Transnational and Transparty, No Peace Without Justice and Hands Off Cain with the support of the Alliance of Liberal and Democrats for Europe in the European Parliament. The conference constituted a first step to head off a profound global reform of the historically schizophrenic – and seemingly established – relationship between the de facto power of the Real Democracies and the existing positive law system based on the UN Human Rights Treaties and Conventions, for an alternative to violence and the degeneration of “real democracies” by promoting a democratic and federal Rule of Law.

Interventions from the floor